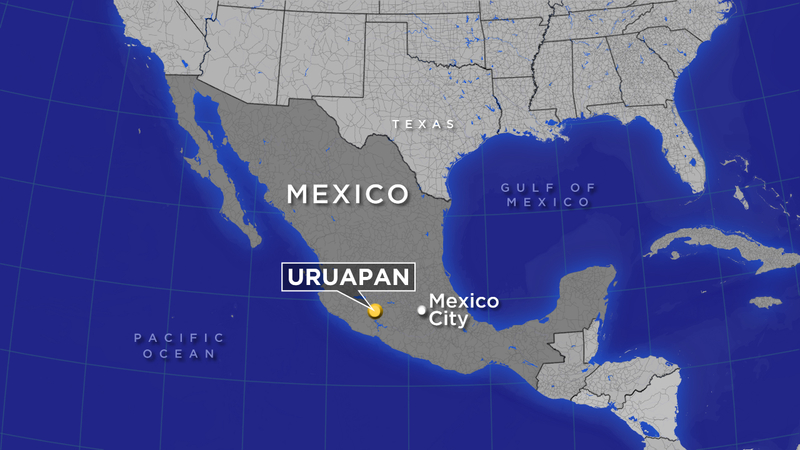 MEXICO CITY, Mexico -- Mexican police found nine bodies hanging from an overpass Thursday alongside a drug cartel banner threatening rivals, and seven more corpses hacked up and dumped by the road nearby. Just down the road were three more bodies, for a total of 19.

The killing spree reported by prosecutors in the western state of Michoacan marked a return to the grisly massacres carried out by drug cartels at the height of Mexico's 2006-2012 drug war, when piles of bodies were dumped on roadways as a message to authorities and rival gangs.

Two of the bodies hung by ropes from the overpass by their necks, half naked, and one of the dismembered bodies were women, Michoacan Attorney General Adrián López Solís said at a news conference.

The victims in the city of Uruapan had been shot to death. Some were hung with their hands bound, some with their pants pulled down.

Hundreds of pounds of drugs destined for the U.S. were seized by federal authorities. Three people arrested are from the L.A. area.

While the banner was not completely legible, it bore the initials of the notoriously violent Jalisco drug cartel, and mentioned the Viagras, a rival gang. "Be a patriot, kill a Viagra," the banner read in part.

"This kind of public, theatrical violence, where you don't just kill, but you brag about killing, is meant to intimidate rivals and send a message to the authorities," said Mexico security analyst Alejandro Hope.

"This kind of cynical impunity has been increasing in Michoacan," Hope added.

In one particularly brazen attack in May, a convoy of pickups and SUVs openly marked with the letters "CJNG" - the Spanish initials of the Jalisco New Generation Cartel - drove through the Michoacan city of Zamora at night, shooting up police vehicles and killing or wounding several officers.

Uruapan is where Mexico's drug war first erupted in 2006, when members of the now-diminished La Familia cartel rolled five severed heads onto the floor of a dance hall.

Homicides in Mexico rose 9.7 percent in the first quarter of 2019 from a year earlier, reaching 8,493 killings in the first three months of the year.

What followed were eight years of terror in Michoacan, until farmers and ranchers rose up in an armed vigilante movement to drive La Familia and its successor cartel, the Caballero's Templarios, out of the state.

Hipólito Mora, one of the original founders of the vigilante movement, said the violence is worse than ever and he wants the army to come back to Michoacan to help battle the cartels. "We're worse off now than we were then," Mora said.

The state attorney general said the killings discovered Thursday appeared to be part of a turf war.

"Certain criminal gangs are fighting over territory, to control activities related to drug production distribution and consumption," López Solís said. "Unfortunately, this conflict results in these kinds of acts that justifiably alarm the public."

Meanwhile, in another part of Mexico, an angry crowd beat and hanged seven suspected kidnappers, leaving some of their bodies dangling from trees, the national Human Rights Commission said Thursday night. The Puebla state government said police and soldiers were sent to the area to try to stop the attack, but villagers from the hamlets of Tepexco and Cohuecan kept them from intervening.

Late Thursday, authorities in the Gulf coast state of Veracruz reported that four dismembered male bodies had been found in 15 bags left along highways near the state's border with Puebla. Veracruz is another battleground between the Jalisco cartel and other criminal groups.

Police in eastern Mexico say gunmen broke into a family party and opened fire, killing 13 people and wounding at least four others.

For years, Mexican cartels had seemed loath to draw attention to themselves with mass public displays of bodies. Instead, the gangs went to great lengths to hide bodies, by creating clandestine burial pits or dissolving corpses in caustic chemicals.

But the Jalisco gang, which has gained a reputation for directly challenging authorities, appears to have returned to showy killings as a way to intimidate rivals.

In 2011, the then-smaller Jalisco cartel dumped 35 bodies on an expressway in the Gulf coast state of Veracruz. In 2012, the Zetas cartel left 49 decapitated bodies on a highway in northern Mexico, and later in the same year they strung nine bodies from an overpass and left 14 severed heads near the city hall.

Still, homicides dropped for a few years between 2012 and 2015, and many thought Mexico's drug war was winding down. But homicides surged again last year and Mexico now has more murders than it did during the peak year of killings in 2011.