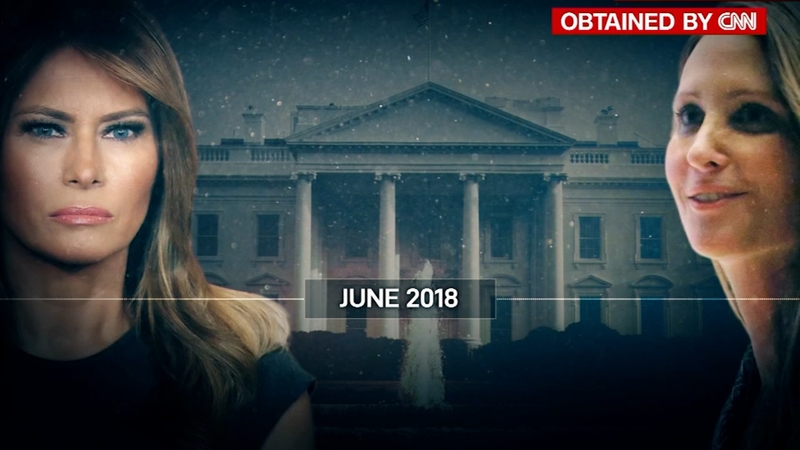 (CNN) -- First Lady Melania Trump was secretly recorded in the summer of 2018 expressing her frustration at being criticized for her husband's policy of separating families who illegally crossed the southern border while at the same time needing to perform traditional first lady duties, such as preparing for Christmas.

"They say I'm complicit. I'm the same like him, I support him. I don't say enough I don't do enough where I am," she said in a tape secretly recorded by Stephanie Winston Wolkoff, a former friend and senior adviser to the first lady who wrote a book about their relationship, "Melania and Me."

The tapes were played exclusively on CNN's "Anderson Cooper 360" on Thursday night and were recorded by Wolkoff after she left the White House.

She continued, "OK, and then I do it and I say that I'm working on Christmas and planning for the Christmas and they said, 'Oh, what about the children that they were separated?' Give me a f****** break. Where they were saying anything when Obama did that? I can not go, I was trying get the kid reunited with the mom. I didn't have a chance -- needs to go through the process and through the law."

The policy Melania Trump was referring to was different from that of her husband, President Donald Trump. Under former President Barack Obama, children were separated from parents only when authorities had concerns for their well-being or could not confirm that the adult was in fact their legal guardian, but not as a blanket policy as was done under Trump -- until a judge forced the administration to stop.

In a statement, Melania Trump's chief of staff Stephanie Grisham blasted Wolkoff for releasing the recording.

"Secretly taping the First Lady and willfully breaking an NDA to publish a salacious book is a clear attempt at relevance. The timing of this continues to be suspect - as does this never-ending exercise in self-pity and narcissism," she said in a statement.

In another recording, Melania Trump emphasizes the reaction of migrant children brought "by coyotes" as evidence of the detention centers' quality and "the way they take care of them."

"The kids, they say, 'Wow I will have my own bed? I will sleep on the bed? I will have a cabinet for my clothes?' It's so sad to hear it but they didn't have that in their own countries, they sleep on the floor," Melania Trump says on the tape. "They are taken care of nicely there. But you know, yeah, they are not with parents, it's sad. But when they come here alone or with coyotes or illegally, you know, you need to do something."

The first lady also cast doubt on the authenticity of some immigrants' accounts of fleeing danger in their home countries.

"A lot of like moms and kids they are teached how to do it. They go over and they say like, 'Oh, we will be killed by a gang member, we will be, you know, it's so dangerous,'" Trump said, mimicking a dramatic voice. "So they are allowed to stay here."

"It's not true that they would, you know what I mean," Trump said, adding that "they're not professional but they are teached by other people what to say to come over and to you know let them go to stay here. Because they could easily stay in Mexico but they don't want to stay in Mexico because Mexico doesn't take care of them the same as America does."

Wolkoff told Cooper on Thursday that she believed Melania Trump may have felt maternal concern for the children but had moved past it to fit in with the administration's agenda.

"I think that as a mother, those maternal instincts in her were set off and she did care," Wolkoff said. "But there is no husband to come to, the leader of the free world, to discuss how she's feeling about that. So regardless of that, she steps in line and she just decides that what she has heard and what she's been told is what the rule of law is in our country."

Wolkoff added, "On the flip side, Melania, the traditions of first lady and President have gone out the window with this couple and I feel that if there were -- there is so much that could be done but, again, no support. No understanding."

Trump fumed following Wolkoff's book release over her former adviser's about-face -- from eager friend and active member of her tightly held inner circle to what Grisham has called, on Trump's behalf, "revisionist history."

In the book, Wolkoff revealed private conversations with the first lady on topics ranging from her frosty relationship with her stepdaughter Ivanka to her marriage, her thoughts on border policy, Michelle Obama, to the controversy over a jacket she wore in 2018 and her frequent use of emojis. And Wolkoff later alleged that Trump used a private email account in the White House, an ethical taboo, even for the first lady, who is not a government employee.

A former Vogue magazine staffer who oversaw high-dollar events, including the Met Gala, Wolkoff has known Melania Trump for more than a decade. The two women were close for several years while both lived in New York City and operated in similar social circles.

Wolkoff was Trump's first hire for the East Wing, acting as senior adviser to the first lady, writing speeches and helping craft what would become the "Be Best" platform.

However, as investigations into inaugural activities unfolded, Wolkoff's relationship with Trump unraveled, prompted by the amount of money Wolkoff and her events firm allegedly pocketed during the planning and execution of the inauguration.

Wolkoff's firm was paid more than $26 million, most of which went to subcontractors, but a hefty amount, reportedly $1.6 million, went directly to Wolkoff's business, according to documents reviewed by CNN. Wolkoff personally received about $500,000 for her role in the inauguration, according to The New York Times.