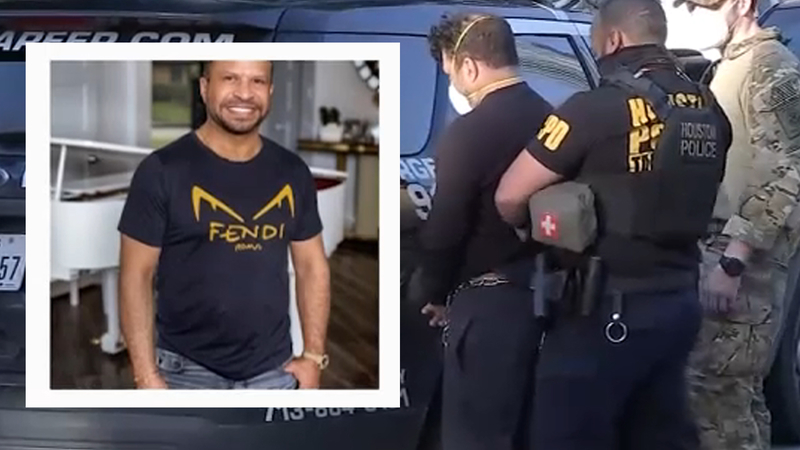 HOUSTON, Texas (KTRK) -- Mohamed Mokbel, seen in federal custody after a raid at his Afton Oaks home Tuesday, faces at least a decade in prison for his alleged role in a $134 million scheme the federal government says scammed insurance, patients, doctors, and taxpayers over a 10-year period.

But in addition to his social media profile and evidently lavish lifestyle, Eyewitness News learned the 54-year-old has had other legal trouble.

According to court records, he and his company, 4M Pharmaceuticals, paid a $150,000 judgment after reaching a settlement in another fraud case. His company is also currently involved in more litigation which is as of yet unresolved. There's a pending trial later this month.

A company CEO known in his upscale Houston neighborhood for his luxury cars and loud, lavish parties was hauled away in handcuffs for a multi-million fraud case.

In the federal indictment against Mokbel and his accountant, Fathy Elsafty, the government alleges they conspired to submit fraudulent claims for medication, topical creams, and medical supplies that in many cases patients did not need after they were lied to and told their doctors approved it.

This led to elderly and sick patients taking unnecessary medication. In this case, the feds allege there were at least 25,000 patients.

Bill Mahon, a nationally recognized health care fraud expert, said though while he is not involved in this case, he is familiar with some of the pharmacies allegedly involved.

He said this type of fraud is complex and all too common.

A $2 million home, a Bentley, a Mercedes and a red Ferrari, which Mokbel appears to have featured on a now-deleted social media account, could become federal property.

The indictment against Mokbel and Elsafty appears to indicate that all of those items were purchased by Mokbel with the money he cashed in from the scheme.

"It is an area that is ripe for fraud because there is so much in the way of volume of coding and patient treatment that is flying through the Medicare system," said Carlo D'Angelo, a criminal defense attorney in Tyler, Texas.

D'Angelo has handled federal fraud cases before. He's not involved in this case either, but is aware of what's laid out in the indictment.

Of course, the defendants have a presumption of innocence, but they face an uphill battle toward an acquittal.

"The prosecutors in the Southern District of Texas are very good at what they do," D'Angelo said. "Federal prosecutors don't typically bring cases to grand jury and indict them unless they have solid, solid footing in the facts."

In some cases, the company allegedly billed for prescriptions dispensed after a patient's death. Investigators also accused the pair of targeting doctors by sending requests for prescriptions that patients often didn't authorize.

"They're winding up in who knows how many hands illicitly and being used for illicit purposes, and they're, at the same time, creating phony medical histories," said Mahon.

These types of schemes are not uncommon, but there are some clues that could prevent you from getting targeted.

"If there is change in the way that your care is being coded," D'Angelo explained. "If there is upcharges that you're seeing when you leave the provider's office, if you're getting notice of prescriptions that you didn't request, then certainly you may want to make that known to the government because that is usually how these cases are uncovered."

Neither defendant's attorneys issued a comment to Eyewitness News on Wednesday. Both men are due in court Thursday morning.