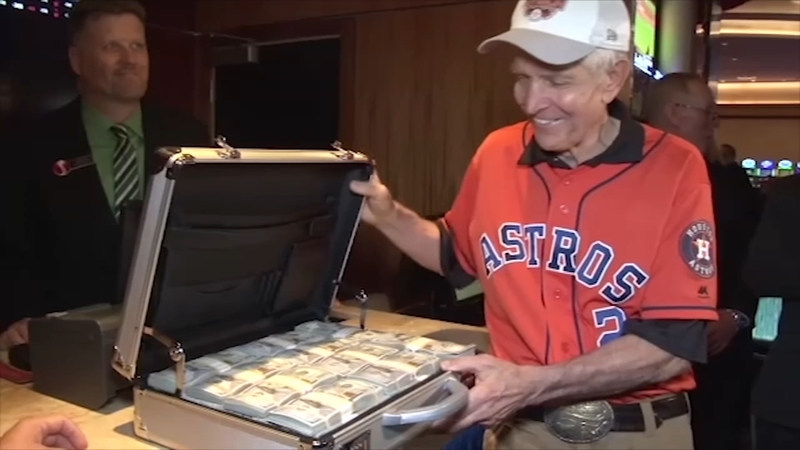 HOUSTON, Texas -- While many Houston Astros fans must now recover from the heartbreaking loss to the Washington Nationals that ended their race for a second World Series title in three years, they likely aren't out the millions of dollars Jim 'Mattress Mack' McIngvale bet on the team.

In fact, Mattress Mack made history as he placed some huge bets on the Astros, including $3.5 million that ranked as the largest bet ever taken by a U.S. bookmaker at the DraftKings sportsbook at Scarlet Pearl casino in Biloxi, Mississippi.

McIngvale, the owner of Gallery Furniture in Houston, ran a promotion this year offering to refund purchases of mattresses costing $3,000 or more, if the Astros won the World Series. McIngvale says sales spiked when the Astros picked up starting pitcher Zack Greinke at the Major League Baseball trade deadline, and then again over Labor Day weekend, when Justin Verlander tossed a no-hitter.

In 2017, when the Astros won the franchise's first World Series, a similar promotion cost Mattress Mack more than $13 million in refunds. Sources told ESPN that year that McIngvale went around Las Vegas, sportsbook to sportsbook, placing more than $1 million in bets on the Astros to win the World Series at around 3-2 odds. Houston defeated the Los Angeles Dodgers in a thrilling seven-game series.

How much would he have had to refund?

While his potential liability on the refunds is growing by the day, estimates are that it's north of $20 million.

What did he do to offset the liability?

McIngvale enlisted the help of two high-level gamblers from Las Vegas to find American bookmakers willing to take giant bets. With just a few days left in the regular season, and the Astros around +220 to win the World Series at most sportsbooks, "Mattress Mack" partnered with Anthony Curtis and Frank Betti, two well-known Las Vegas sharps, to scope out which places in Las Vegas and New Jersey will take the biggest bet at the best price. He hoped to get $10 million down on the Astros to win more than $20 million to help pay for mattress refunds.

On Oct. 3, McIngvale was in New Jersey to place another large wager on the Astros to win it all. He bet $1.5 million at the same +220 odds at the FanDuel Sportsbook at The Meadowlands. The wager would have won $3.3 million and is believed to be the largest legal online wager in the state's brief sports betting history.

McIngvale also placed a $200,000 World Series bet on the Astros +250 at the South Point in Las Vegas and had additional wagers for undisclosed amounts with Nevada bookmakers Caesars, MGM, Treasure Island and Circa Sports.

On Thursday, The Action Network reported that he flew to Mississippi to place another $675,000 on the Astros to win Game 7.

How much did he bet overall?

While not even 'Mattress Mack' knows the exact amount he's bet on individual games in the World Series, along with futures wagers on the Astros to win, he had at least $11.6 million in play.

What has he learned

"I normally don't take private jets" McIngvale told ESPN. "But because of the fluidity of the situation -- the Astros win the price goes down, the Astros lose the price goes up -- I've got to be able turn on a dime and get back before the game starts. I'm dreading seeing my American Express bill with these jet charges."

Would he do this again?

"I've had a lot of fun doing it,"McIngvale told ESPN. "You know, I'm a marketing guy, and we've got millions and millions of dollars in earned media. The people of Houston understand that I'm 100% on the Astros' side, and I'm pulling for my customers. That's why I'm doing this."

Was he able to get down as much as he wanted?

Mattress Mack said he originally was aiming to bet around $10 million on the Astros, but as the odds shortened, the amount grew close to $14 million.