Man dies after series of US-290 crashes end with him being struck by Pct. 4 deputy 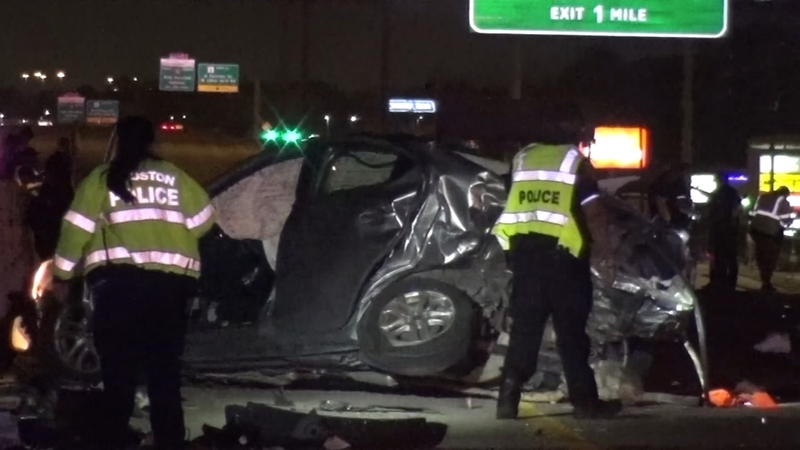 Man dies after being ejected during crash and hit by deputy

HOUSTON, Texas (KTRK) -- A man is dead after a series of accidents led to him being struck by a Harris County Precinct 4 deputy overnight.

Houston Police Assistant Chief Ben Tien said the victim was believed to be traveling in the westbound lanes of US-290 near Tidwell around 2 a.m., and tried to change lanes, but ended up hitting another car.

The victim's car then spun out of control and was struck by a third car, according to Tien.

#TRAFFIC ALERT: Constables are working a Major Accident at 13400 Northwest Fwy. Follow us at https://t.co/E8STYHMtoE to receive live feeds on crime and arrests in your area. pic.twitter.com/gQJ0PkH0al

During the crash, the man was ejected from his vehicle and thrown into the eastbound lanes of traffic.

At the same time, a Harris County Precinct 4 deputy was traveling in the eastbound lanes, transporting a suspect in a previous incident to jail.

The deputy struck the victim just after he landed in the eastbound lanes, according to Tien.


The victim died at the scene.

Commanders & PIO are en route to a fatality crash on Hwy 290 outbound near Tidwell.

Prelim info is a male running from a crash scene was struck by a Harris County Pct 4 Constable patrol vehicle. The male is deceased. The deputy is not injured. No other known info. #hounews pic.twitter.com/dcjTNVKei3

Authorities believe the victim may have had a passenger in his car, but are continuing to investigate the details.

The deputy and person in custody were not injured, according to Tien. The driver of the third car was taken to the hospital with minor injuries.

Investigators say the other drivers involved in the series of wrecks did not show signs of intoxication.


Tien said he saw dashcam video, and the victim landed right in front of the deputy's vehicle before he was struck.

The man's name has not been released. Authorities only identified him as a 23-year-old man.

US-290 from Beltway 8 to Tidwell was shut down in both directions for hours during the investigation.