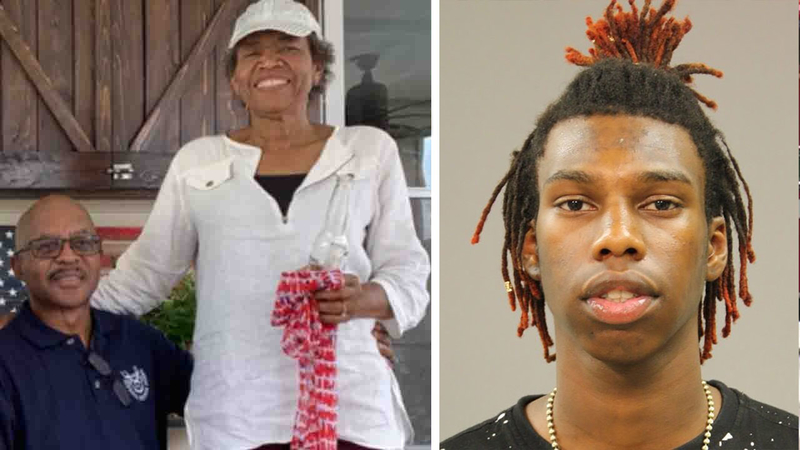 Man charged with murder of woman who was riding in SUV

A 19-year-old man is wanted in the shooting death of 62-year-old Saron James, who was on her way home with her husband.

Saron was killed last week when someone opened fire on the SUV she was riding in with her husband in west Harris County.

Tekoney Blackledge has been charged with murder, court documents show. He's currently not in custody.

Saron's family offered up prayers Tuesday for the loved ones of the accused killer.

Kelley Mock and her husband, Chris Mock, remembered Saron as a woman of faith, a giving person and a kind soul.

Her daughter said it's only a matter of time until justice comes in her mother's case.

"Turn yourself in or you're going to get caught," said Kelley Mock. "I hate that. I hate that he took her away from me like that. I can rest assured my mom is in a better place. That's where I pull my strength and comfort from."

The family set up a GoFundMe page to help with the unexpected funeral costs.

A celebration of life for Saron will be held this Saturday, July 27 at 10 a.m. at Cypress Family Fellowship Church located at 17330 W Little York Rd, Houston, TX 77084.

Saron was shot through the passenger window of their white Isuzu Rodeo just before 6:30 p.m. on July 16 at Old Greenhouse Road at Windy Stone.

Her husband, Cleveland James, told deputies he thought he heard fireworks before noticing the passenger window was shattered. He explained that he didn't realize at first that his wife had been shot in the head.

"I didn't even duck. I just turned away because there was smoke," Cleveland explained. "I thought it was firecrackers and all this smoke started coming out, and the force of the explosion. I turned to my wife and said, 'Saron, did you see that?' And she just was slumped over, and that was the biggest shock to me."

Cleveland pulled over and screamed for help, flagging down other drivers. He held a rag to his wife's face to stop the bleeding.

Saron was taken to a nearby hospital, where she died.

An investigator on the case was contacted by a Houston police officer. The HPD officer was working an extra job at Texas Children's Hospital when he investigated a gunshot wound victim who arrived at the hospital for treatment. That person claimed he was shot by unknown people while driving his white vehicle.

Authorities say this is the vehicle of interest in the killing of 62-year-old Saron James.

Sheriff Ed Gonzalez said last week that investigators were trying to track down a white Audi SUV seen speeding the opposite way, westbound on Old Greenhouse.

Witnesses reported the Audi was being driven by a black male in his early 20s with curly hair. They also told police they saw at least two other people in the vehicle.

"We believe the couple was complete innocent bystanders, maybe they just got caught in the middle of gunfire," Sheriff Gonzalez said. "We really don't know. We're trying to piece everything together."

The sheriff says Saron could be the random victim of a separate road rage incident that happened earlier between other drivers.

'Stay with us, baby, stay with us.' Cleveland James said he did all he could to help his wife after she was shot.

After meeting at a bus stop in Brooklyn, Cleveland told ABC13 he knew he was going to marry Saron from the moment he saw her.

They moved to Houston from Brooklyn in 1985. They bought their first home in their neighborhood off Old Greenhouse Road.

Cleveland says he and his wife drove that road almost every day since it was a shortcut to their neighborhood.

Deputies said the couple was almost home and was talking about what they were going to have for dinner when the shooting occurred. They live just five minutes away from the grisly scene.

WATCH: Authorities say the couple was coming home from a doctors appointment when someone opened fire on the SUV
EMBED More News Videos

The woman and her husband were just minutes away from their home when she was killed.

Family members who arrived at the scene late Tuesday broke down in tears.

"I'm just going to miss her. She's an amazing woman. She's a strong woman. I don't care how much we fussed, how much we fight, I know my mom loved me with every being in her body, and I just want people to know how big her heart is. She could preach to anybody," said Saron and Cleveland's daughter, Kelley Mock.

Relatives describe Saron as a very religious, faith-filled woman who was organized, hard working and a giver.

"She's strong-minded, but she's very organized. Woman knows the Bible thoroughly. I have met no one to this date who knew the Bible like my wife," Cleveland said.

He and his family have a message for his wife's killer.

"Give yourself up. You don't know what you have taken from us. You have taken an angel. That woman was an angel. You will answer to God," Cleveland said. "We didn't socialize much, but she was a giver in the background. What you did, you will pay for it. This woman was such an inspiration for a lot of people that you don't know."

"I want that person to be caught, but they can't bring her back. They can never bring her back, and it's just so devastating that someone could just do that, and they could go on about their day, and they just tore up our family," Mock said.

The family has set up a GoFundMe account as they plan Saron's funeral and fight for justice in her killing.

Sheriff Gonzalez said this is just another example of senseless violence seen in recent weeks and months.