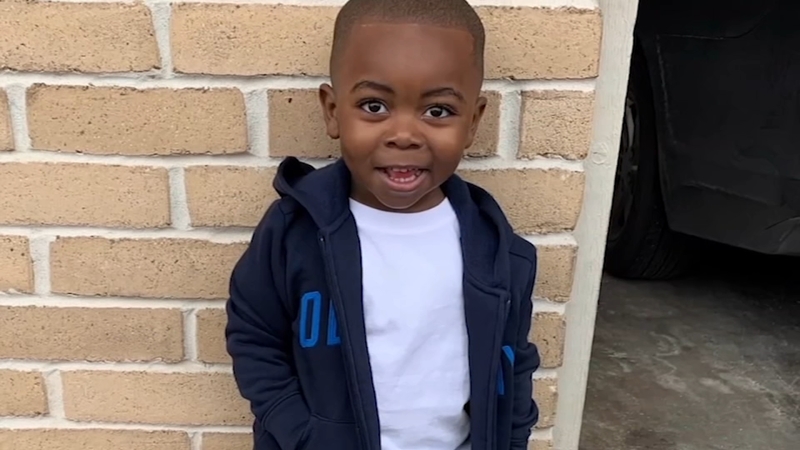 SPRING, Texas (KTRK) -- The mother of a 2-year-old boy who was murdered last year asks 'What if it was your child?' to the man charged in the boy's death.

The Harris County Sheriff's office announced Thursday that Cecil Lakey, 23, was charged with capital murder in the shooting death of Ivory West Jr. in July 2019.

A day of highs and lows, but I’m definitely happy to provide this update: @HCSOTexas investigators have filed capital murder charges on Cecil Lakey (23 yoa) in connection with the shooting death of Ivory West Jr (2 yoa). West, his father and a family friend were shot on the pic.twitter.com/Cer4zjrKqN

West was with his father and a family friend inside their garage at the Trailing Vine Place apartments on Trailing Vine Road off Aldine Westfield Road.

The father was shot nearly 10 times, according to deputies. The friend was shot once in the foot, and the 2-year-old was pronounced dead at the scene. A second suspect is still at large. Investigators believe robbery was the motive.

"What about your kids? What if it was your child?" Ivory's mother, Dorothy Harris, responded when asked what she would say to Lakey. "He needs to stay in there (jail). I don't feel no sympathy for him."

Harris says she is haunted by the day her son was killed and she was relieved to hear about the charges.

She says investigators told her physical evidence tied Lakey to the scene. He was already in jail on another capital murder charge, accused of killing a man during a drug buy in March 2019.

Lakey's defense attorney, Mark Hochglaube, told ABC13 they look forward to Lakey's day in court. He questions the case against him.

Court records show before Lakey was charged with the boy's murder, Hochglaube asked a judge for Lakey's $500,000 bond to be reduced due to the COVID-19 outbreak in the jail. The request has not been granted. Bond on the latest charge has not been set.