KABC
LOS ANGELES -- Here's a look back at seven key moments from the 1992 Los Angeles riots, when Angelenos saw protesters take to the streets in anger over the verdict in the Rodney King beating trial.

THE VERDICT
After seven days of deliberations, four white LAPD officers -- Sgt. Stacey Koon and officers Theodore Briseno, Laurence Powell and Timothy Wind -- were acquitted on April 29, 1992, of almost all charges in the beating of Rodney King. The jury was deadlocked on one assault count involving Powell.

ABC7 photographer Stephen Coleman was outside the Simi Valley courthouse, where an angry crowd gathered after the verdicts were read. Soon after, an angry Los Angeles Mayor Tom Bradley denounced the verdict as "senseless," declaring, "The jury's verdict will never blind the world to what we saw on the videotape."

FLORENCE AND NORMANDIE
Violence erupted in South Central L.A. following the verdict. Residents exploded in anger, burning and looting stores by the hundreds and attacking non-black passers-by. When a truck tried to get through the intersection of Florence and Normandie avenues, rioters pulled driver Reginald Denny out of the vehicle, brutally beating him.

Bobby Green, a black truck driver watching the violence unfold on television, saw Denny being attacked and quickly headed to the scene. He and others helped push Denny back into his truck's cab, and then Green drove him to the hospital, saving his life. Later, despite threats and insults from the community, he testified against Denny's attackers.

Reginald Denny, a white truck driver, was pulled from his vehicle and brutally beaten by a group of men.

FIRST AME CHURCH
Thousands of people gathered at the First African Methodist Episcopal Church of Los Angeles on the first night of the riots.

"We encourage you to express your outrage and your anger verbally," Bradley told the crowd that night. "We don't want you to resort to violence. That would only destroy every positive thing that we have been doing."

KOREANS PROTECT BUSINESSES
Koreans armed themselves to defend businesses being looted during the riots. Cameras were rolling when shots were fired between rioters and Koreans, who were positioned at storefronts and rooftops.

Koreatown was one of the hardest hit single areas in the riots. Adding to the tension between African Americans and Korean Americans was the killing of 15-year-old Latasha Harlins by grocer Soon Ja Du - only two weeks after the Rodney King beating. Many say it underscored the resentment felt toward the Korean American shop owners and made them a target.

More than 2,000 Korean families were affected, according to the Korean-American coalition, and nearly half the total dollar loss incurred during the riots were to Korean-American businesses.

Koreans armed themselves with guns to defend themselves and their businesses during the Los Angeles riots.

"I never thought I would do this in my Marine Corps career, never. I mean, protecting American soil from Americans themselves," one Marine told ABC7 on camera.

EDWARD JAMES OLMOS
Actor Edward James Olmos called for the public to help sweep the streets of L.A. While ABC7's Marc Brown interviewed a group of young people, Olmos said to them on air, "Ask him if he could join me tomorrow by picking up a broom. I'm going to be out on the streets tomorrow of Los Angeles starting the cleanup."

The next day, Olmos led a group of people chanting "stop the violence" and began sweeping the streets.

"This is the images that our children should be seeing of us trying desperately hard, children and people of all different colors coming out here to help clean this place up," Olmos said.

Edward James Olmos asks the public to join him in sweeping the streets of L.A. after days of rioting.

RODNEY KING
On the third day of the riot, Rodney King made an emotional plea for peace, appearing before TV cameras to ask in a trembling voice, "Can we all get along?"

Rodney King pleads for the riots to end, saying "Can we all get along?"

Three months after their acquittals in criminal court, LAPD Sgt. Stacey Koon and Officers Laurence Powell, Theodore Briseno and Timothy Wind were indicted on federal charges of violating King's civil rights, and Koon and Powell were eventually convicted and sentenced to 2.5 years in prison.

The city of Los Angeles paid King $3.8 million for medical bills, pain and suffering sustained as a result of the beating. 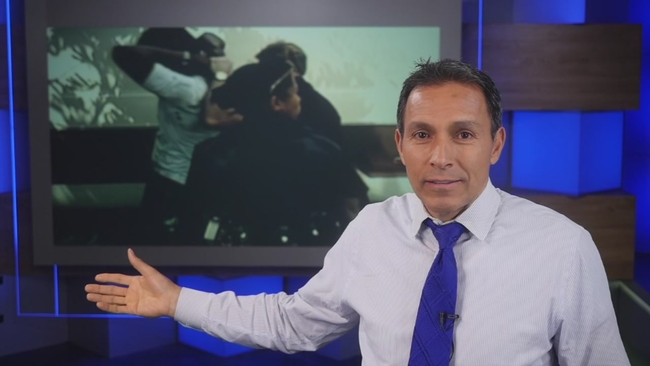 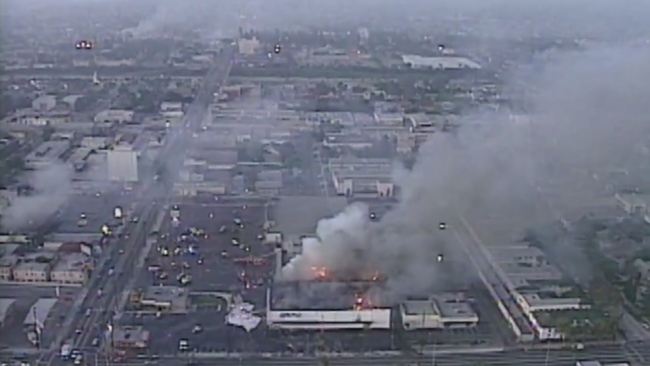 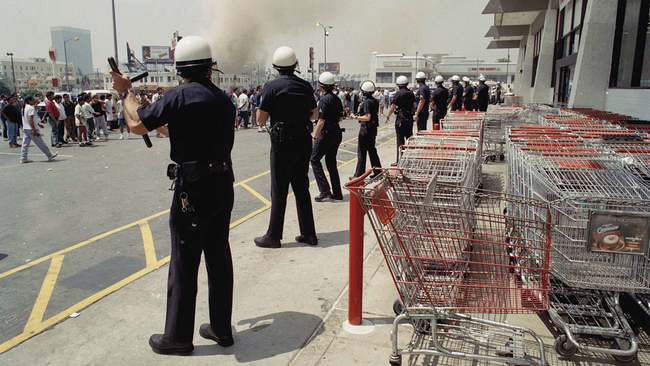