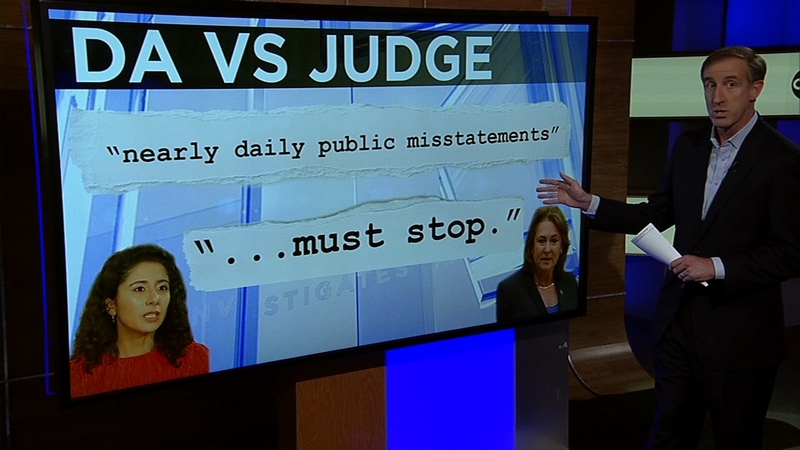 HARRIS COUNTY, Texas (KTRK) -- Harris County District Attorney Kim Ogg says ongoing attacks by County Judge Lina Hidalgo have to stop. Hidalgo this week increased her attacks on Ogg, calling the indictment of three of Hidalgo's staffers in a public corruption case "political" and alleging Ogg will "have me indicted."

Ogg responded Thursday saying the DA's office is committed to seeking justice by relying on evidence to bring cases before the grand jury, courts and jury trials.

"The nearly daily public misstatements being made by Harris County Judge Lina Hidalgo about pending felony cases brought against three members of her staff now compel comment to the public by this office and by me, the top law enforcement official in Harris County. Failing to do so allows a top county official, in her official capacity, to continue to improperly influence those people of Harris County who will serve on the jury in this case. This harms everyone, including the accused, and must stop," Ogg said in a statement Thursday.

Alex Triantaphyllis, who is Hidalgo's current chief of staff but was her deputy chief of staff at the time the allegations took place, Aaron Dunn, then a senior advisor for public safety and emergency management at the county, and Wallis Nader, who is Hidalgo's deputy policy director, were indicted in April. Each one of them was indicted on one count of misuse of official information and one count of tampering with a government record. The charges are all felonies.

The three were indicted for their alleged role in discussing a bid with a potential vendor, Elevate Strategies, who was later awarded a nearly $11 million COVID-19 outreach contract.

Triantaphyllis and Nader still work at Hidalgo's office. Dunn left for a job at the Harris County Flood Control District in March.

An indictment is not a finding of guilt, just that a grand jury found there was enough evidence to pursue criminal charges against an individual.

In her lengthy statement Thursday, Ogg again defended the work of a grand jury, which Ogg says took five months to review the case.

"The criminal justice process is not a debate. It is not theater. It is the search for truth and the place for accountability under the law. We do not fight out our differences in the streets or on social media and I will not try this case in the court of public opinion."

Ogg ends her statement reminding the public, "our work continues."

Since news of the indictments, Hidalgo has stood by her staff, declaring they did nothing wrong and that the DA's office is "weaponizing" the system with a "flimsy" case.

On Wednesday, Hidalgo tweeted, "I expect this political exercise to continue through Election Day. (Harris County DA Kim Ogg will) have me indicted. Or name a 'special prosecutor'- an illusion of independence since those are still beholden to the DA. She did that before in a political prosecution that went nowhere. I'm not deterred."

Four search warrants related to the case were unsealed earlier this month and demanded Google turn over documents accessed by Hidalgo and six other senior staffers.

"I believe that Google LLC is in possession of electronic data that will show that Dunn, Triantaphyllis and Nader created, edited, commented on and/or viewed multiple scope of work documents," investigators wrote in the search warrant. "I also believe it is probable that the above Google Docs were subsequently sent to (Elevate Strategies' founder Felicity) Pereyra on January 13, 2021 and January 15, 2021, which is prior to the first public release of the Vaccine Outreach RFP on February 5, 2021, and well prior to the first time a vendor could download a copy of the Vaccine Outreach RFP on February 19, 2021."

The search warrants do not allege Hidalgo misused official information and there's no public indication that the investigation is getting any closer to a possible indictment of Hidalgo.

Hidalgo's attorney previously said the document was sent to Pereyra by mistake.

On Thursday, Ogg said the contract bidding process must be transparent and the criminal charges are being prosecuted "after a diverse grand jury indicted the defendants."

"An indictment is a finding by a grand jury of probable cause that crime occurred, and in this instance that three 'public servants,' while working in the County Judge's Office, diverted an $11 million contract to a political consultant under the guise of COVID vaccine outreach - money that a more qualified bidder could have used to accomplish the worthwhile goal of increasing awareness and participation in COVID vaccination in underrepresented communities throughout Harris County," Ogg said. "In this case, a grand jury spent five months reviewing evidence and listening to testimony concerning the Elevate Strategies contract procurement. Judge Hidalgo has referred to case evidence, to information the investigators and prosecutors don't have. She has an ethical duty and responsibility to provide any evidence under oath to the Texas Rangers and she should do so immediately. The criminal justice process is not a debate. It is not theater. It is the search for truth and the place for accountability under the law. We do not fight out our differences in the streets or on social media and I will not try this case in the court of public opinion. We will try this case, like every other criminal case, in a court of law before a jury of peers, and we will look to them for a fair outcome. When all the evidence is seen by a trial court, justice will prevail; our work continues."

"It's absurd for Kim Ogg to say she 'will not try this case in the court of public opinion,' when she has been releasing a cascade of leaks about this political exercise all along," Hidalgo said. "The County Judge's Office and staff have cooperated with this investigation from the outset and produced over 24,000 pages of documents. Kim Ogg had an 'ethical duty and responsibility' to view that evidence objectively and seek the truth, not pursue a predetermined, politically motivated outcome parroting the false allegations of my right-wing opponents."
Hidalgo claims the evidence the DA's office obtained months ago "makes clear there was no quid pro quo, no inside job, no conspiracy - nothing."

"Numerous media outlets have shown how her allegations distort the truth. Everyone needs to be aware that this is a politically motivated exercise that is taking place in the middle of my reelection and no amount of posturing by her will make false allegations true," Hidalgo said. "I agree with Kim Ogg on one point - justice will prevail. This will be exposed as an election year stunt."