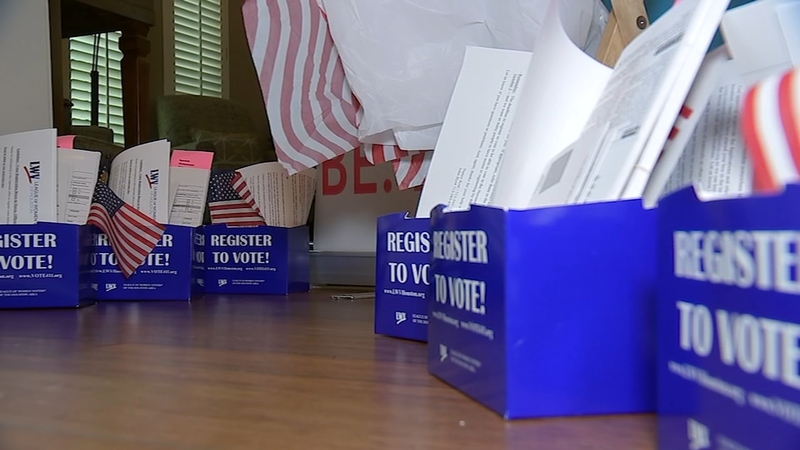 HOUSTON, Texas (KTRK) -- From the U.S. Post Office to local grocery stores, the League of Women Voters is finding obstacles to registering voters.

Nancy Kral never thought her house would be filled voter registration kits, emblazoned in patriotic red, white and blue, with no place to go.

"The normal places where we would register voters, graduations, sporting events, churches, are not available (because of COVID-19)," said Kral, a League board member. "We go where ever people need us to be."

Recently, the League of Women Voters developed a plan to drop off voter registration kits at post offices around the region. They dubbed it "Adopt a Post Office," and members throughout the region eagerly signed up.

It hasn't gotten off the ground.

"The League is non-partisan non-profit organization," said Dr. Annie Benifield, who leads the League's efforts in voter registration. "Its primary function is to empower voters and defend democracy, and most people have to go to the post office for something."

Since last week, at least 13 post offices around Houston have rejected the League's attempt to simply place registration cards in the lobby. Benifield says volunteers have gotten a variety of reasons, and no consistent answers as to why registration cards are not allowed.

ABC13 reached out to the USPS, and a spokesperson out of Dallas sent the following statement:

"The Postal Service has not changed its policies on voter registration activities or displaying voter registration information in lobbies. Poster 7 sets out specific limitations and conditions that apply to in-person voter registration drives that may occur in public areas of postal facilities during an appropriate period before an election. But this is different from depositing unattended stacks or boxes of forms or other materials, which is prohibited under 39 C.F.R. 232.1(o). Local officials do not have authority to enter into agreements for deposit or display of such materials."--

"It's been a perfect synergy for the League to have the ability to inform voters and generate more energy for voting, that's something the state needs," said Rottinghaus, who notes that Texas does not have automatic nor online voter registration. "The goal of getting more people registered is really at the cornerstone of our democracy, so if that's taken away it's really going to hurt the ability to get more people out to vote."

The League has also had difficulty getting big businesses on board. With no festivals and community events to attend, the League reached out to big box retailers like Walmart, Kroger, and H-E-B. So far, none of them have offered to allow the league to display its voting registration information.

A Kroger representative says because of COVID-19, its stores want to reduce reasons for people to congregate and keep everyone safe.

The league did recently do a voter registration drive at Taco Deli, and has a series of events at St. Arnold's brewery coming up. It hopes to be able to sign up more businesses to allow voter registration, and it is hoping the U.S. Post Office will change its mind.

"We have over 700 volunteers in our volunteer pool," said Kral, "They're antsy to do anything, and it's so frustrating."

To learn more about the League of Women Voters, visit the group's website.

To register to vote.