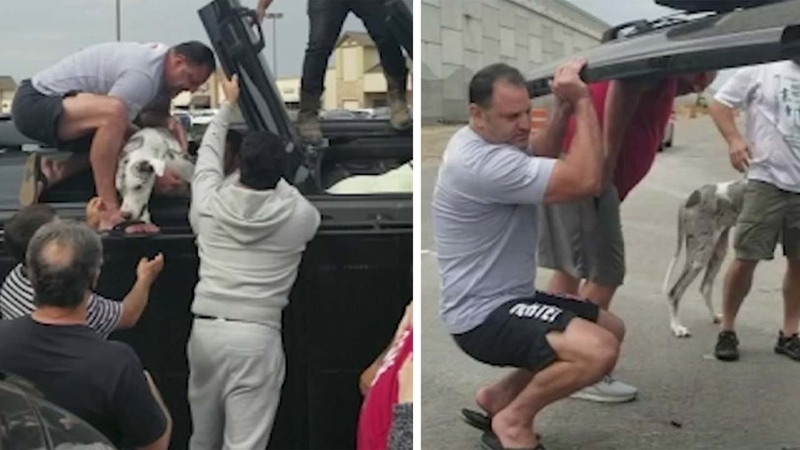 LEAGUE CITY, Texas (KTRK) -- A victim who was rescued by several good Samaritans from a crash in League City Saturday afternoon wanted to let all of his rescuers know he's forever thankful he and his family of five are still alive.

Saturday started off normal for the LaRochelle family, but it quickly took a turn. On their way home to El Lago, a truck clipped the back of their Hummer H3 on the FM 518 and I-45 feeder road.

"I saw it coming from the left. I thought surely he's not going to hit me, so I tried to swerve," said Jarett LaRochelle. "He caught the back end, I think right on my back driver's side wheel. And, in a heartbeat - next thing I know we're on our side."

The truck landed on a curbed area and not in oncoming traffic. Within moments, good Samaritans jumped into action.

"I don't know where they came from, where they were, but next thing I knew, people were helping me open the door," said LaRochelle. "Somebody was there to catch it to make sure it stayed open and asked if everyone was OK."

Robert Lee was one of the first to respond. He's a retired coast guardsman and he used what he learned during his 20 years of service.

"I jumped on top of it, so I can open up the door and see if they were OK first," said Lee. "After I figured out that they were OK and there wasn't any life sustaining injuries, we started to evacuate the survivors."

LaRochelle, his wife, 4- and 6-year-old sons and their Great Dane all made it out, thanks to the selfless work of Lee and others. They did sustain some bruises, contusions and soreness, but will otherwise be OK.

LaRochelle said he may never get the chance to meet all his rescuers, but he wants them to know he's forever grateful.

"It's really nice that people were able to do this favor for me," he said. "And I hope that if I'm ever in the same situation, I'm able to return the favor."