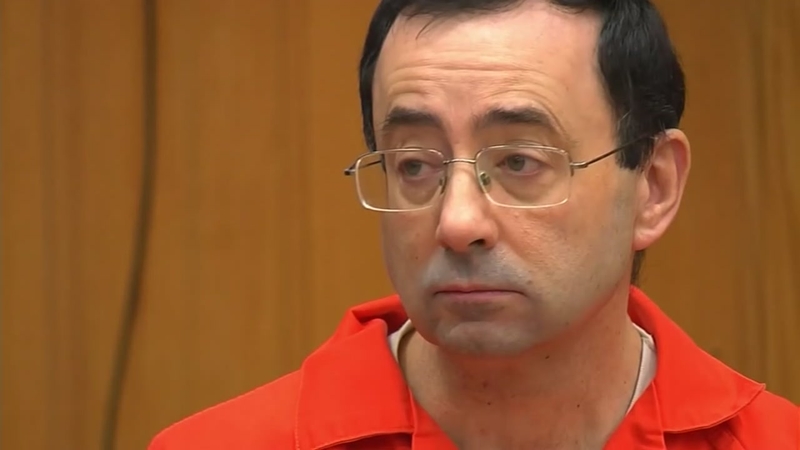 The lawsuit alleges that women, ranging from age 14 to age 41, were sexually molested by Nassar. At the time of the abuse, Nassar was employed as a Michigan State University team doctor and working as the USA Team Gymnastics doctor.

Nassar is accused of touching the victims inappropriately.

One of the victims, Victoria Carlson, talked about the unimaginable experience.

"What reason did I have to question my doctor? I decided I needed to just stay quiet and no one needs to know what happened to me," she said during a press conference Thursday.

During the press conference, the attorneys did not reveal the dollar amount being sought in the lawsuit.

"The trauma these women have suffered as a result of the sexual abuse and assaults has only been made worse by the failure of these institutions to take meaningful responsibility for what happened to these young girls on their watch," said victims' attorney James White.

More than 260 women and girls say they were assaulted by Nassar, some as far back as the 1990s.

Earlier this year, Nassar was convicted and sentenced for his crimes -- including 22 counts of criminal sexual conduct from his time working at Michigan State University.

Lou Anna Simon resigned as Michigan State's president on Jan. 24 and athletic director Mark Hollis followed two days later. The longtime leader of USA Gymnastics, Steve Penny, quit in March, and all board members stepped down at the demand of the U.S. Olympic Committee.

"USA Gymnastics does not comment on pending legal matters. USA Gymnastics is sorry that any gymnast was harmed by the despicable crimes Larry Nassar committed. The safety and well-being of our athletes are our highest priority and at the forefront of the decisions and actions that USA Gymnastics is taking to build a culture of empowerment that encourages our athletes to speak up, especially about difficult topics, and promotes a safe, positive training environment."

"The many brave survivors and their stories are bringing important changes to sports. The reprehensible behavior of Larry Nassar and other abusers has no place in our Olympic and Paralympic community. Organizations, institutions and individuals alike must reignite a culture for competitive excellence - one that is a safe, respectful and supportive environment. The USOC has made significant progress to strengthen protections for athletes, and we recognize that our work is never done."

Michigan sports doctor Larry Nassar now knows his punishment after being convicted of sexually assaulting gymnasts and other young women and girls.