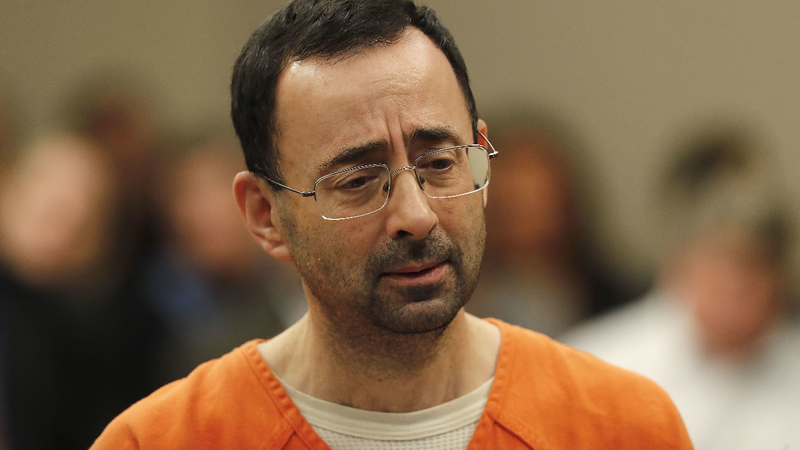 Larry Nassar sentenced to 40 to 125 years in prison

CHARLOTTE, Michigan -- The former sports doctor whose serial sexual abuse of girls and young women has shaken the gymnastics world was sentenced Monday to a third prison term of 40 to 125 years behind bars for molesting young athletes at an elite Michigan training center.

Larry Nassar, 54, listened to dozens of victims for two days last week and was almost attacked by a man whose three daughters said they were abused.

He pleaded guilty to penetrating girls with ungloved hands when they sought treatment for injuries at Twistars, a gymnastics club that was run by a 2012 U.S. Olympic coach. Nassar already has been sentenced to 40 to 175 years in prison in another county and to a 60-year federal term for child pornography crimes. He worked for Michigan State and USA Gymnastics, which trains Olympians.

Randy Margraves was tackled by sheriff's deputies Friday before he could pummel Nassar in court. He said he wanted just a minute in a locked room with the "demon."

"This cannot be a lawless society. I know that," Margraves, 58, told reporters during a public apology. "I lost control, but I gained control later in a holding cell."

More than 260 women and girls say they were assaulted by Nassar, some as far back as the 1990s. Most victims who wanted to speak publicly or submit a statement did so earlier during Nassar's seven-day court hearing in Ingham County, including 2012 Olympic teammates Aly Raisman, Jordyn Wieber and McKayla Maroney.

The scandal has rocked Michigan State, which has been accused of repeatedly missing opportunities to stop Nassar, who had a campus office and was a revered figure in sports medicine.