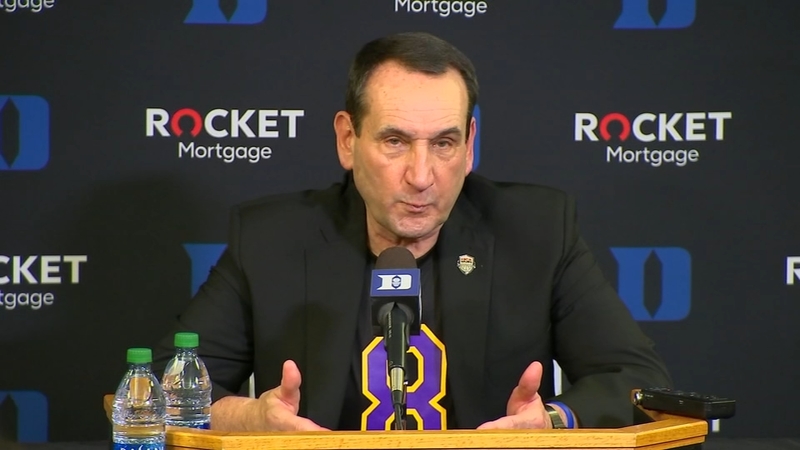 DURHAM, N.C. -- It's been an emotional few days in the basketball world, as notable figures such as Duke coach Mike Krzyzewski have been coping with the death of Kobe Bryant and his 13-year-old daughter, Gianna.

Duke's 79-67 victory against Pittsburgh came with several tributes to Kobe, including both teams wearing t-shirts with Kobe's number in warmups. There was a 24-second moment of silence before the game. Railings inside Cameron Indoor Stadium were wrapped in yellow and purple streamers for Bryant, who spent 20 seasons with the Los Angeles Lakers.

Krzyzewski was thoughtful and sensitive when addressing Bryant's death after the game -- his first time speaking publically about the basketball icon's passing.

"The last couple days have been really emotional," Krzyzewski said while wearing a shirt underneath his blazer with Kobe's number. "Kobe was one of my players. I coached him on three teams. We had special moments, private and public."

Coach K admitted he had been emotional in the days following Bryant's death, noting his family's relationships with the NBA legend. One of Krzyzewski's grandsons is nicknamed 'Mamba' in honor of Bryant. His wife was also fond of him.

"He was amazing with my grandkids," Krzyzewski said. "He would go to my granddaughters and go 'hi princess' and kiss their hand...Mickie had an unbelievable relationship with Kobe."

The remarks concluded an up-and-down night for Krzyzewski, who lashed out at Duke student section at halftime for a chant toward Pittsburgh coach Jeff Capel. Capel played at Duke under Krzyzewski for four years in the mid-'90s and later was an assistant for several seasons.

The Lakers postponed their scheduled game Tuesday night to allow players to grieve. Teams throughout the league have taken 24-second violations to start games in honor of Kobe.

"I just want you to know how much this meant," Krzyzewski told his players.