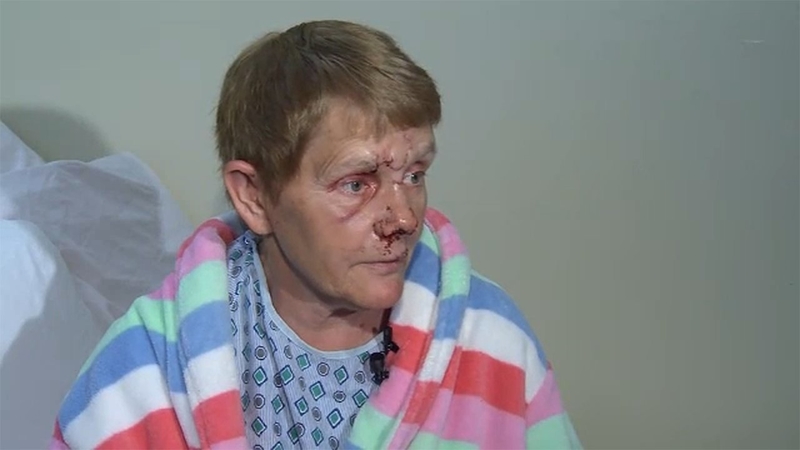 New York, New York -- A walk in the woods turned into a terrifying experience for a woman in upstate New York.

She was suddenly attacked by a rabid coyote.

Now as she recovers, she is sharing details about how she fought the wild animal off.

"I don't actually really know how I survived. I came close to dying I really did but I have a beautiful family and husband and stuff, I've got to live," said Rita Sweenor, coyote attack survivor.

Sweenor never expected to be sitting in the hospital when she visited a bike path on Wednesday.

It's a path she had taken many times before to take pictures of birds.

She was capturing a picture of a blue heron when a coyote attacked.

"He latched on to my leg," Sweenor said. "I just knew he was rabid."

She says she fought back, hitting the coyote with her camera, pinning it down and trying to throw the animal into the nearby water several times.

The third time she tried to throw the coyote into the water, she says she fell in also, finally losing the animal.

She swam across, climbed up a hill and through a field to the closest home for help, putting pressure on her arm to try and slow the bleeding.

Sweenor says she was anxious to tell the homeowner what happened to protect others.

She wanted that path closed.

"I was just afraid he would kill somebody, I knew there was a lot of people on that path I was just afraid," Sweenor said. "I don't even know how I survived, I nearly died, he nearly killed me."

Sweenor is recovering from several injuries to her arms, her legs, face and scalp, and many of those injuries are deep.

She's grateful that her survival instincts kicked in.