This little girl was dying of kidney failure, until her preschool teacher offered to donate hers 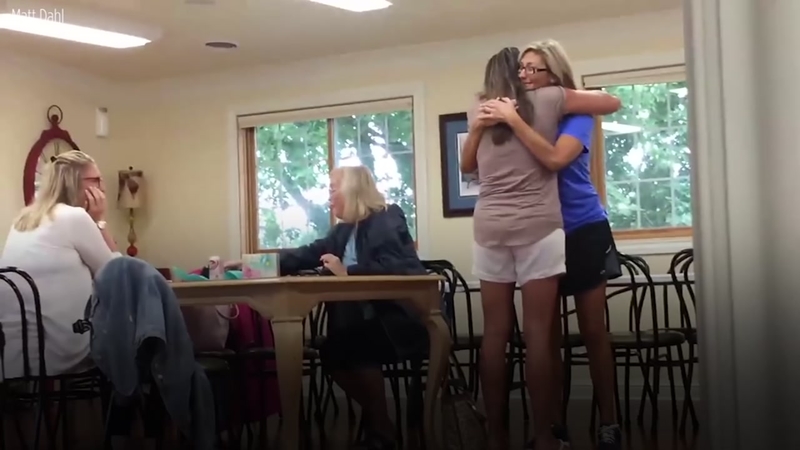 Last October, Dena Carreyn's 4-year-old daughter Lyla became gravely ill, very suddenly. As Dena shares with Babble, her daughter was diagnosed with a rare autoimmune-related vasculitis known as Microscopic Polyangiitis (or MPA), which caused damaging kidney failure. After nine long months of treatment, including 10-12 hours a day of being hooked up to a dialysis machine, it soon became apparent that Lyla desperately needed a kidney transplant.

And so, the Wisconsin family launched a nationwide search this summer to find a compatible donor for Lyla, hoping that someone, somewhere would be willing and able to help their little girl finally have the childhood she so deserves. Just a few weeks ago, their tireless search finally came to a very happy, yet very surprising end: Dena got the amazing news that Lyla's preschool teacher, Beth Battista, was a perfect match, and would be donating her kidney to Lyla.

The emotional moment was caught on video and later shared in a Facebook post on Dena's page, where it's since gone viral.

"Last Friday, I was called into Lyla's school, Kids Express Learning Center," Dena wrote in the September 15 post. "I was told a new teacher was starting, and I needed to meet with her. You see, every time Lyla gets a new teacher, I have to train that person re: Lyla's medical conditions, medications, etc. It's a whole thing."

"So I show up at the school, and Lyla's two current teachers are there, and they tell me the new teacher is on her way. And then they give me a present. And then this happened."

In the video, Dena is seen sitting at the table alongside school staff, when she's given a box. Inside, she finds a note that tells her the news: Beth is a perfect match, and she's going to be Lyla's donor. Overcome with shock, Dena hugs Beth, and cries onto her shoulder. She places her hand over her mouth, and clutches her stomach in disbelief.

In her Facebook post, Dena included a copy of the note, which reads, "I may just be her teacher now, but soon a little piece of me will be with Lyla forever." The note is signed, "I'm Lyla's kidney donor."

"When I opened the package and read the note, it took a moment to sink in," Dena tells Babble. "As soon as I realized what was happening, I was elated. The feelings were very similar to what I experienced the day Lyla was born; Lyla is getting a second chance at life, thanks to Beth."

It goes without saying that Beth is a very special person indeed; but she's also completely humble about what she's doing for Lyla and her family.

"I just had a feeling when I first heard about Lyla being sick," she tells Babble. "It was something inside me that said I needed to get tested. After searching the entire country, it in a true miracle that I am her match. I feel blessed to be able to save her life and give her the future she deserves."

As a mother of two school-aged children and the wife of a teacher myself, I can say beyond certainty that teachers are everyday heroes, who often go above and beyond to care for and support their students. And Beth Battista is truly an inspiration - the kind of teacher we all wish our kids could have.

Of course, to Lyla's family, she's even more than just a teacher: she's become a member of the family.

"Words cannot express the depth of my gratitude," Dena tells Babble. "How do you possibly thank someone for saving your child's life? Words are not enough. Beth will forever be a part of our family."