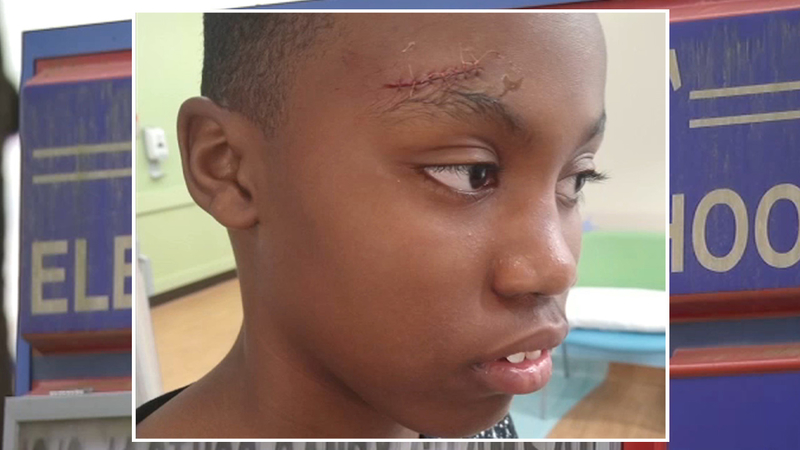 HOUSTON, Texas (KTRK) -- A Cy-Fair ISD fifth grade student had to get six stitches on his forehead, and his mother said the teacher is to blame.

The alleged altercation happened last week at Post Elementary School. Kiana Randolph said she got a call from the school nurse that her son had been injured in an altercation.

When she got to school, she found her son's forehead had an open wound above his eyebrow. The injury was concerning enough that 11-year-old Kamauri Williamson was airlifted to the Texas Medical Center for treatment.

Randolph said she was told her son got into an altercation with a teacher over a juice box during lunch.

"They're supposed to be in a safe place while you're at work, and to get this type of reaction of a head being busted open, especially over a juice box," said Randolph, visibly frustrated. "Nobody deserves this, especially my son. I would never had thought that would have happened to my kid."

Portions of the altercation, which began in the hallway but ended in a classroom, were apparently captured on school surveillance video. Randolph said she's seen portions of that video.

"You see the teacher grab the hoodie, and you see, at one point my son's feet lift up off the ground, he's basically being choked."

Cy-Fair ISD released the following statement, "A Post Elementary School student had a medical emergency last Wednesday that precipitated the need for emergency treatment. The employee was placed on administrative leave, and the incident is currently under investigation."

Because the teacher is not charged with a crime, ABC13 is not identifying him at this point. A check of the state database shows his teaching certificate is up-to-date.

"I have a lot of trust in the justice system, so I hope this guy is going to be prosecuted for doing something he shouldn't have," said Adam Ramji, the family's attorney. "More so, other teachers need to be aware that if you're around children, there are certain ways to manage it and definitely certain ways not to manage it."