6 injured and 2 detained after stabbing at Beckendorff Park in Katy, authorities say 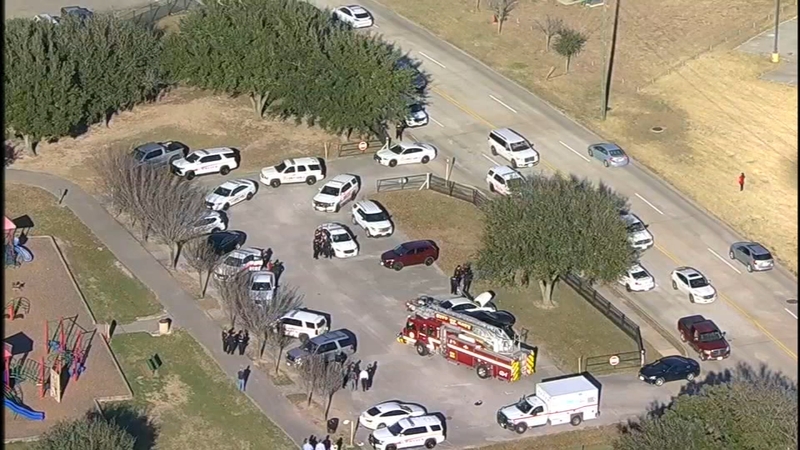 KATY, Texas (KTRK) -- At least six people were injured and two of the injured have been detained following a stabbing in the Katy area.

The stabbing happened Monday shortly after 3 p.m. in the 1800 block of Katyland Drive. Authorities said this appeared to be a school fight involving Katy ISD students, but it's unclear what school the students are from.

At the scene, authorities said six people, most of them juveniles, were injured. At least one 18-year-old was also involved.

As the investigation continues into what led to the brawl, authorities said 11 to 18 people were involved. They add that some of those involved had bats, and a knife was also recovered at the scene.

Waiting to hear from police about injuries, motive and arrests. @abc13houston pic.twitter.com/RLigqbgdZj

When ABC13 reached out to Katy ISD for more information, the district released the following statement:

Katy ISD police and local law enforcement are actively investigating an altercation that took place at a Harris County park following school dismissal today. At this time, multiple students are believed to have been involved in the altercation. Campus and District administration are working closely with law enforcement to complete a thorough investigation. Anyone determined to have been involved in the incident will be disciplined in accordance with the Student Code of Conduct and Discipline Management Plan, as well as be subject to any potential criminal consequences. Out of an abundance of caution additional Katy ISD police will also be assigned to patrol the area until the investigation has been completed.
Report a correction or typo
Related topics:
katystabbinginvestigation
Copyright © 2022 KTRK-TV. All Rights Reserved.
STABBING
Katy ISD employee's husband accused of stabbing wife to death
Northside residents upset with Salvation Army plans to reopen
Officials release photo of man wanted for wife's murder in Atascocita
Deputies looking for man accused of stabbing wife to death
TOP STORIES
San Antonio artist creates memorial for Uvalde victims
Beto O'Rourke, Parkland survivor challenges NRA in Houston protest
Timeline breaks down Uvalde school massacre
NRA day 1: Trump calls for school security overhaul in Houston speech
Official admits police made 'wrong decision' in TX shooting
Here's your holiday weekend forecast
Delta Airlines to cut daily flights in July to decrease load
Show More
Man sentenced life in prison for killing Spring couple in their home
Texas survivor apologized to dad for blood on clothes, losing glasses
Massacre survivor says gunman told them: 'You're all gonna die'
4th grader 'did what she had to to survive' Uvalde shooting, aunt says
KIPP HS student detained for cyber weapon threat, officials say
More TOP STORIES News