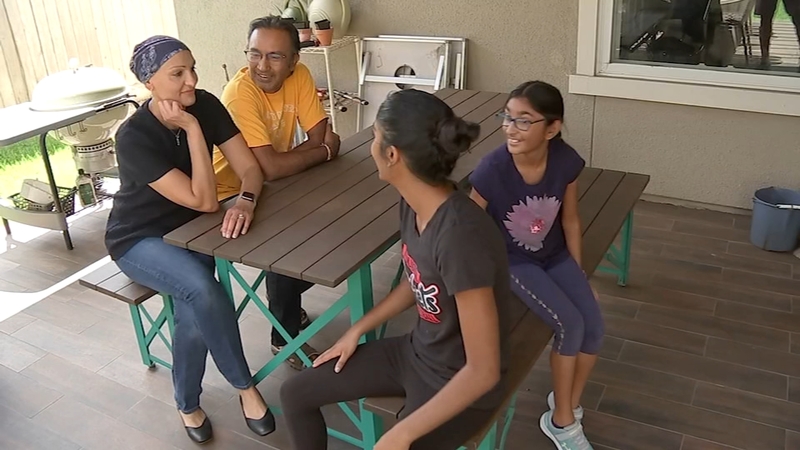 HOUSTON, Texas (KTRK) -- On a quiet street in Bellaire, the Sinha sisters, in seventh and fifth grade, already know all about the historic nomination of Sen. Kamala Harris as the Vice President on the Democratic ticket.

"I think that Kamala Harris has inspired young women like me that we can do anything we put our minds to," 10-year-old Anisa Sinha said.

"Kamala, she comes from a culture that really celebrates the strength of powerful women," said older sister Reva, who is heading into seventh grade. "I just feel like she helps me and other young women feel seen and heard."

The girls' parents smile with pride hearing those words from their daughters. As Indian Americans, the fact that a child of Jamaican and Indian immigrants is nominated for the second highest office in the country is a point of pride.

"I think the intersection of her being Black and Asian is really important," said Pranika, the girls' mother. "Not only is she a woman of color, but the fact that she is representing two populations that are historically underrepresented in politics is really important. My great aunt's name is Kamala, so I identify with that as well."

"If my Twitter and Facebook feed is any indication, the South Asian community is pumped," he said. "We've been huge (monetary) contributors to both parties for a long time. But now that we're on a track to engage, not just with activists, but also for our kids."

Sandill remembers when he first ran for office 13 years ago, South Asian candidates were almost unheard of in Texas. Now, there are several other judges from his community, and the Fort Bend County Judge, K.P. George, is Indian American.

Harris' background could increase voter turnout in November, and could possibly make a difference in a few tight races down the ballot.
"In a diverse state like Texas, she brings a lot to the table," political consultant Keir Murray said. "Texas has more Black voters than any state in America, more than 1.5 million. And she's South Asian, and the Asian American population is the fastest growing and most politically dynamic in Texas."

One of the candidates hoping to benefit is Sri Kulkarni, the Democratic nominee for Congressional District 22, which covers large parts of Fort Bend County, including Sugar Land.

"I was that kid growing up here," Kulkarni said. "For us to see somebody like that, it inspires our families (and) our children. We have always been represented in business and science, but we have been underrepresented in Democratic institutions. That changes in 2020."

As for the Sinha girls, it's not so much about who wins or loses in November that's on their minds. It's about turning on the television and seeing someone they can relate to that's making a lasting impact.

"Seeing someone who looks like you (is) so important to dream and aspire to (be) what you want to be," said Pranika.