KTRK
HOUSTON, Texas (KTRK) -- As Juneteenth nears and national protests against racism continue, the push to make Juneteenth a national holiday is gaining more support by the day.

On Monday, U.S. Congresswoman Sheila Jackson Lee introduced a resolution recognizing the historical significance of June 19th, 1865-- the day slaves in Galveston would learn they were free nearly two and a half years after Abraham Lincoln signed the Emancipation Proclamation.

A petition started this year by 93-year-old Opal Lee from Fort Worth has gained more than 300,000 signatures calling on lawmakers to make Juneteenth a national holiday.

"Certainly, racism has played a big role," he said.

It took nearly two decades after Martin Luther King Jr.'s assassination for Congress and Pres. Ronald Reagan to make MLK Day a national holiday, and it wasn't until 1980 that Texas became the first state in the U.S. to recognize Juneteenth as a state holiday after State Rep. Al Edwards introduced House Bill 1016.

"It's like the Confederate monuments issue we've been talking about," Preuss said. "From the time the first monument went up in Richmond, Virginia in the 1890s, there were people against it."

But, more change could be on the way. On Thursday, U.S. Senator John Cornyn announced he will soon introduce a bipartisan bill to make Juneteenth a federal holiday.

"I think one of the unfortunate consequences, and a blessing in disguise, is George Floyd's death and some of the other people who have recently been killed," explained Preuss. "That their deaths may be not be in vain, and that the nation is really finally starting to take a good hard look at how we remember the past, and maybe, this is one step in that direction."

Here's how to celebrate Juneteenth events in the Houston area

How to watch Galveston's celebration of the 155th Juneteenth

What is Juneteenth? History, celebrations, future of the holiday celebrating the end of slavery 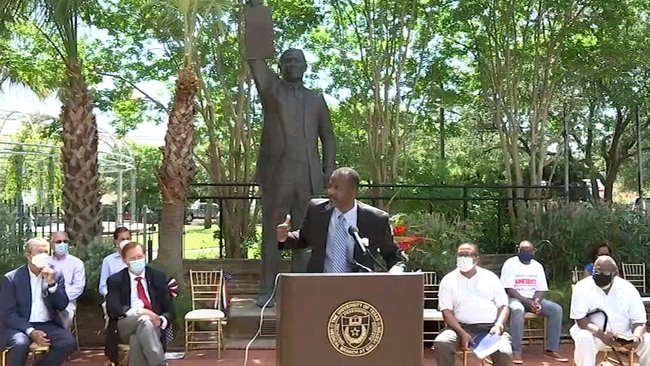