Earnest Pugh, the Isley Brothers, and Kool & the Gang are all among the entertainers set to help the city celebrate freedom.
KTRK 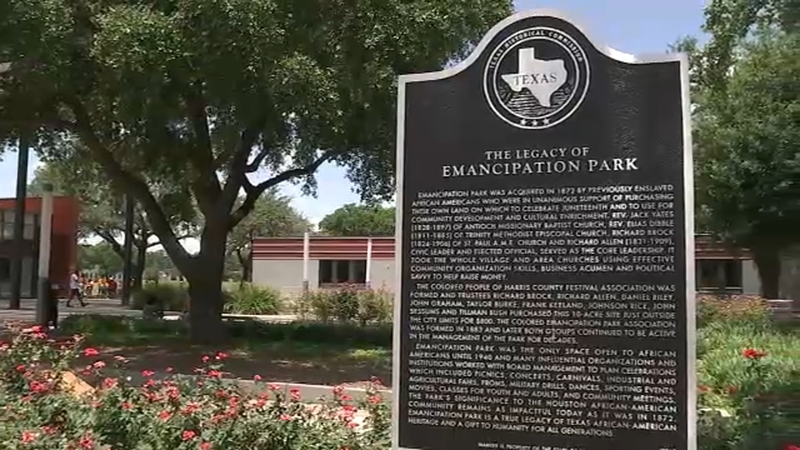 HOUSTON, Texas (KTRK) -- Get ready for a sesquicentennial celebration like no other at Emancipation Park commemorating Juneteenth.

The June 18-19 event, presented by the Kinder Foundation, will feature local vendors, a resource fair, community impact discussions, national recording artists and more - all to commemorate the park's 150th anniversary and June 19, 1865, the date slavery was abolished in Texas.

Emancipation Park was founded in 1872 by four local freedmen and the community as a place for unity, empowerment, remembrance and the celebration of emancipation and Juneteenth.

"This would never have been here had they not worked together as a community," said Jackie Bostic, vice-chairman of the Emancipation Park Conservancy Board and the great-granddaughter of Jack Yates, an Emancipation Park founder. "This is something we should all be proud of."

Part of the festivities will include drawing on gospel star power.

Ramon Manning, chairman of the Emancipation Park Conservancy board, announced that recording artists, musicians and entertainers Earnest Pugh, Zacardi Cortez, Monica Lisa Stevenson and Pastor Mike will be among those in the lineup.

And then, the celebration will take it family-reunion style with performances from the Isley Brothers, Kool & the Gang, and Frankie Beverly and Maze.

"No event at this scale has happened in any community of color in this city's history," Manning said.

Part of the Juneteenth celebration will also include lectures and talks online, covering everything from economic empowerment to health and wellness disparities in communities of color through programs with Memorial Hermann and Harris Health.

And in the spirit of go big or go home, Manning said they're definitely going big, with plans to give out $150,000 in mini grants to community organizations.

Look out for the full list of activities and events as well as parking information online soon on epconservancy.org.

Juneteenth recognizes the first day of freedom for enslaved Africans in Texas and commemorates the end of slavery in the United States as a whole.

The Emancipation Proclamation issued by President Abraham Lincoln freed enslaved people in Confederate states in 1863. It was a measure meant to punish the Confederacy during the U.S. Civil War and did not cover enslaved Africans in border states.

It also failed to free those held in bondage in Texas. That would not come until June 19, 1865, when Union General Gordon Granger landed in Galveston, Texas, and issued General Order #3. Popular belief is that the enslaved Africans in Texas did not know about the Emancipation Proclamation until Granger's announcement.

However, some historians have disputed that claim. You can read more about why here in this story about how the United States came to celebrate Juneteenth.


In 2021, Juneteenth became a federal holiday. That effort was led by Texan Opal Lee, who shared with ABC13 last year how she first celebrated the holiday as a child growing up in Marshall before moving to Fort Worth at age 10.

But there was one story she kept quiet her whole life: the night when 500 white rioters forced her family out of their home and set it on fire.

"The people didn't want us. They started gathering. The paper said the police couldn't control the mob. My father came with a gun and police told them if he busted a cap they'd let the mob have us," Lee recalled. "They started throwing things at the house and when they left, they took out the furniture and burned it and burned the house."

"People have said that perhaps this is the catalyst that got me onto Juneteenth, I don't know that," said Lee.


But instead of dwelling on what happened, she worked to make sure people never forgot Juneteenth.

In 2016, when she was about to turn 90 years old, she had the idea to walk from Fort Worth to Washington, D.C. She was hoping somebody would "notice a little old lady in tennis shoes," she said, and notice they did.

In 2020, lawmakers introduced a resolution aiming to recognize the historical significance of the holiday.