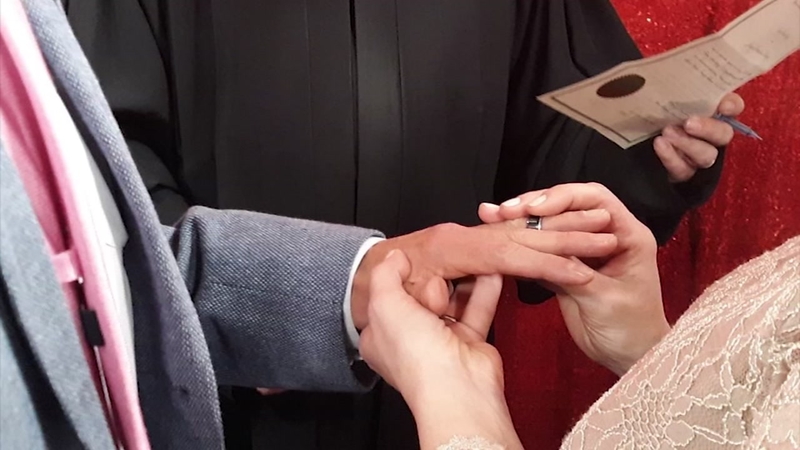 LOVE JUDGES: Ted Oberg Investigates fees on courthouse weddings and why officiants get to keep them

HOUSTON, Texas (KTRK) -- Everyone wants to save a little money getting married. And a courthouse wedding is one of the best ways. And even if the fee is low and you do enough of them, that money gets big. And we found one judge marrying couples by the thousands.

Being in love: that's the easy part.

But paying for it all is tough. Which makes a courthouse wedding a great deal.

Click on the map to see the prices we found at JP Courts across Harris County.


Harris County records show thousands of couples make that choice every year. At Justice of the Peace courts, couples pay for their license and then pay the judge a small fee to perform the wedding.

The judge says the I-do's and a few minutes later, the couple is married.

This whole courthouse wedding deal brings in big bucks. Even though the weddings are in county buildings during the work day, Harris County rules allow those judges to set their own rates and keep every dollar they charge.

It can be free and there's no maximum rate. We found judges who perform weddings charge anywhere between $50 and $140 for a wedding - and remember they keep it all.

Records ABC13 obtained from the County Clerk's office show Harris County judges have married 35,326 couples in the last five years. Any judge - JPs, County and District Judges - can marry couples. We focused our look on Justices of the Peace as they are at or near the top of the wedding lists.

If we take the average price among JPs, judges have earned a combined $2,927,112 since 2013 on top of their regular salaries.

Harris County taxpayers don't get a dime of that money.

In the City of Houston, municipal court judges also perform weddings. In the city, though, the $100 fee is deposited in the city account. City of Houston municpal judges aren't paid any extra for weddings.

When we scoured all those wedding records, we found Justice of the Peace Russ Ridgway is Harris County's undisputed love judge. He works in the Harris County Courthose Annex on Chimney Rock.

Ridgway performed more than 11,000 weddings in the last five years, according to county records, and he currently charges $80 a piece.

Ridgway didn't want to talk to us, but records show his court is the third busiest in the state with civil and criminal cases. It's not like he is sitting around waiting for doe-eyed couples to walk in the door, but he alone has taken home hundreds of thousands of dollars in the last five years just from weddings.

Judge David Patronella does weddings, too. His fee is the second lowest in the county, and records show he has only performed a fraction of the weddings Judge Ridgway has.

Patronella says it's time to slow down this love train: pay judges a little more in salary and claw back the wedding cash. Patronella suggests a $25,000 annual raise would make up the difference. For some Justices of the Peace, that would be a pay cut. For others, a raise.

"I think it would make more sense if in setting off our salaries, that a more reasonable salary would be paid," Patronella said. "Any of the monies collected during office hours in the county building would be received by the county."

But until the county changes the rules, couples will keep coming for the good deal, at least for them.

Have a tip for Ted Oberg? A problem to solve? Get in touch with us on our tip page, or send a tip below. (On mobile? You can open our form by tapping here.)
Report a correction or typo
Related topics:
family & parentinghoustonted oberg investigatesweddingswedding
Copyright © 2021 KTRK-TV. All Rights Reserved.
TED OBERG INVESTIGATES
Millions at risk in Houston after GLO review of Houston housing
13 Investigates how many repeat offenders are out on bond
'When it all got real': HFD logs show real-time Astroworld Fest chaos
Astroworld's head of security, risk management not licensed with state
TOP STORIES
Matthew McConaughey says he won't run for Texas governor
6 dead, including 2 teens, in span of 10 hours on Houston roads
Shots fired while families eat at Galleria-area restaurant
19-year-old shot trying to sell PlayStation 5 in NW Harris Co.
11-year-old girl fatally shot by father in E. Texas hunting trip
'Everything is lost': Family in need after SW Houston townhome fire
Judge sets $1M bond for man charged with neighbor's murder
Show More
Man fatally shot in head outside SW Houston apartment complex
Man stabbed to death during fight outside north Houston restaurant
Innocent driver and passenger killed in crash with DWI suspect
Trial set to start on charges Jussie Smollett faked racist attack
Fashion designer Virgil Abloh dies at 41
More TOP STORIES News