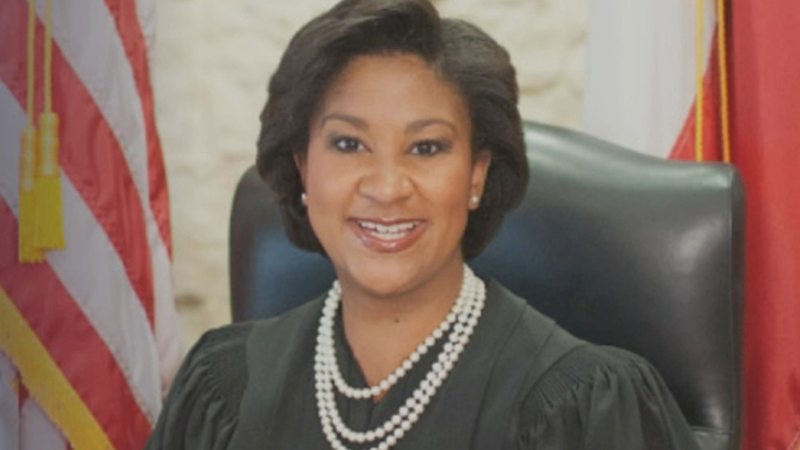 HOUSTON, Texas (KTRK) -- A Harris County civil judge, who is currently suspended, is accused of shooting at her husband's girlfriend during an argument.

Judge Alexandra Smoots-Thomas, who served on the bench of the 164th Civil District Court for 10 years before her suspension last year, has been charged with aggravated assault with a deadly weapon.

Houston police said the incident happened at the victim's home in the 14000 block of Jewel Meadow Drive on Monday. Investigators said Smoots-Thomas was in the woman's driveway honking and causing a disturbance.

When the woman came out of the home, she and Smoots-Thomas got into an argument, according to police. That's when Smoots-Thomas allegedly fired a gun at the woman.

Her attorney, Kent Schaffer, told ABC13 the woman involved in the incident is the girlfriend of Smoot-Thomas' husband.

Schaffer said Smoots-Thomas was arrested Wednesday morning. She's being held on a $10,000 bond.

Smoots-Thomas is currently suspended after being charged last year with using campaign funds on jewelry, luxury items, her mortgage and more. She even announced she was still running for re-election in 2020.

She was charged with 10 counts of wire fraud, with prosecutors alleging she diverted campaign funds for non-campaign expenses. She pleaded not guilty.

Smoots-Thomas was indicted last year by a grand jury. At the time, Schaffer said the investigation began when FBI agents informed her that an anonymous complaint of bribery had been brought to their attention.