Josue Flores, 11, was stabbed over 20 times on May 17, 2016, as he walked home from Marshall Middle School in north Houston.
KTRK
By Mycah Hatfield 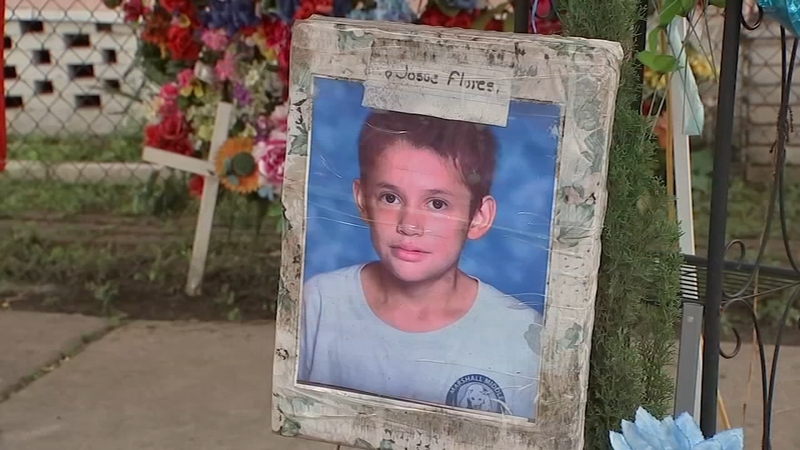 HOUSTON, Texas (KTRK) -- "The trial concerning the murder of 11-year-old Josue Flores slowed down significantly on the third day. Defense attorneys have focused their attention on what they referred to as a "poor investigation." They are questioning how much information was documented in reports and how it was documented.


Jackson is charged with murdering Josue, who was stabbed more than 20 times while walking home from school in May 2016.

Court ended Tuesday afternoon shortly after the defense's request for a mistrial was denied by Judge Denise Collins. The defense claimed they were not given a memo that an investigator brought to the stand which prevented them from properly investigating. The document dealt with how Jackson was found by police. During the police investigation, a Salvation Army employee did a sweep of the building, according to the investigator, and located Jackson in his room.

Wednesday morning, the judge continued discussion about the issue. The investigator who brought the memo to the stand the previous day was dismissed without entering the courtroom.

The defense asked for more time to be able to locate the employees who did the sweep on June 3, 2016 because he said they were "key witnesses." The judge denied his motion.

Jurors were brought in to the courtroom at about 10 a.m. and a lieutenant with HPD who was involved in Jackson's arrest took the stand first.

While he was taken to the homicide division for questioning, the witness worked with the district attorney's office to get a search warrant for the room he was found in.

Defense attorneys attempted to impeach the witness over his description of the green jacket. Monday during a pre-trial motion hearing, the same witness took the stand concerning the search warrant. Then, he said you could see the distinct lettering on the green jacket if you leaned over it. Today, he said it was not visible. The witness said he "misspoke" on Monday. Ultimately, the lieutenant was not impeached.

The lead defense attorney on the case called it a "poor investigation" to the judge during one of the two times the jury was dismissed while the lieutenant was on the stand.

The defense once again called for a mistrial during questioning of the 19th witness. Judge Collins denied it.


Jurors were shown the green jacket in person when the 20th witness, the crime scene investigator who photographed Jackson's room at the Salvation Army, took the stand. The lettering on the back of the jacket said "JBLYMEN."
Defense objected to the jacket being allowed into evidence, citing an improper chain of custody. Judge Collins overruled the motion and allowed it.

Wednesday afternoon, the prosecution in the Josue Flores murder trial called four people to the stand who were in the area of Fulton Street when the 2016 murder happened. Each of them had a different description of what the attacker was wearing.

He recognized it was a child, not a woman, now lying face down in the grass and asked if he was OK but did not get a response. The witness said he thought the child urinated in his khaki school pants but said he quickly realized it was blood. He called 911.

The 911 call was played for jurors. Josue Flores' father left the courtroom prior to the audio recording being shared.

"A man ran up and stabbed this kid," the witness could be heard saying to a 911 operator.

He told the operator that he had been stabbed in the arm and abdomen and noted that a police officer was driving by and had stopped.

He described the suspect then as a Black male, about 6 feet tall, weighing around 200 pounds with a black shirt and cargo pants on.

In court, the witness said he got a "better look" at the suspect but not a "good look."
His fellow bandmate said he saw the suspect throw the little boy into the grass as he ran north on Fulton Street. He too thought the suspect was just "roughing him up."

The witness described the suspect as a Black man with a white shirt and black pants and a medium build.

Defense attorneys took issue with the detailed account this witness gave in court on Wednesday in comparison to what he told police back when it happened. He was made to watch his interview with police captured on body camera during court and return to testify about an hour later.

He told attorneys when he returned that he did not feel comfortable telling police at the time. He did not end up giving officers more information until 2017.

Josue's screams brought a woman who lived nearby out of her home as she unloaded groceries, she testified.

The 23rd witness, who only spoke Spanish, cried on the stand when she was asked about seeing Josue lying in the grass and the blood surrounding him. His father also got choked up listening to her testimony.
When asked if she recalled the suspect physically, she looked at Andre Jackson, who was sitting next to his attorneys, with a disgusted look in her eyes. She said the suspect had a "long neck" and a "dark" complexion.

When she spoke to police years ago, she described the suspect as skinny and very tall with black shoes. She described him as "very clean."

The final witness of the day said he came outside when he heard screams. He claims to have tracked down the police for help and chased the suspect down in his van.

He recalled seeing the suspect picking up his green jacket and a backpack from the ground and running.

Defense attorneys raised questions about the validity of his testimony.

RELATED: A 2017 Texas law offers money to help kids get to and from school safely. No districts have applied.
EMBED More News Videos

The Josué Flores Act, a Texas fund designed to provide transportation for children in need, was established after an 11-year-old was murdered while walking home from school in 2016.