Josue Flores, 11, was stabbed over 20 times on May 17, 2016, as he walked home from Marshall Middle School in north Houston.
KTRK
By Mycah Hatfield and Jeff Ehling 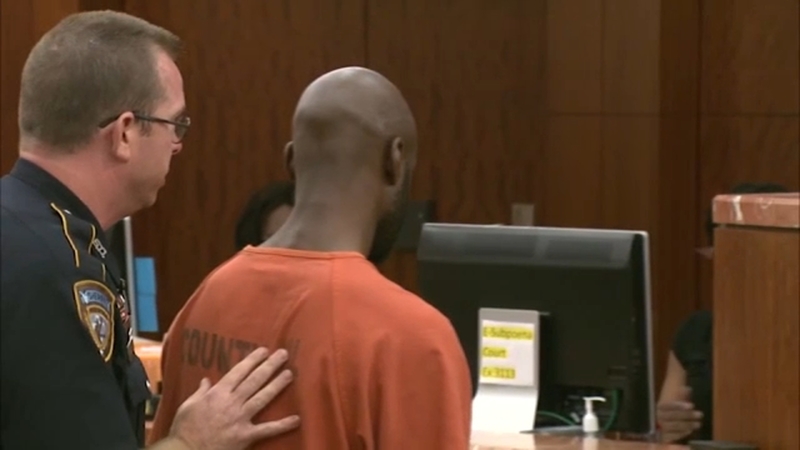 HOUSTON, Texas (KTRK) -- More than 10 witnesses took the stand Monday in the murder trial for a man accused of stabbing and killing an 11-year-old boy who was walking home from school.

The state said during the trial, jurors will hear from several different witnesses, who say they saw a man matching Jackson's description leaving the crime scene shortly after the attack.

They said the jurors will also see surveillance video of Jackson leaving the scene.

The jury is made up of five men and seven women.

Before the opening arguments began, the defense brought up concerns with evidence relating to a green jacket found in a room at the Salvation Army on N. Main, where Jackson was staying at the time.

The defense had concerns about why police took the jacket and how they connected Jackson to it.

They emphasized that their client is not guilty of the crime he is charged with and said authorities were in a rush to charge someone.

Surveillance video from 2016 showed Josue walking along the sidewalk moments before he was attacked. He was just blocks away from his home.

The first person to take the stand was the 11-year-old's science club teacher. He testified that they had an end of the year party the day of his murder and the children stayed 15 minutes longer than they usually would have. Jurors were shown likely the last photo ever taken of the Josue.

Next, prosecutors called a sixth grade secretary to testify. She told jurors that she saw Josue leaving school that day. She said he usually walked home with his sister and she did not see her there. The secretary said she asked the sixth grader where his sister was. An objection in court prevented the woman from telling the court what Josue said in return.

The woman said she watched the 11-year-old walk out of the front gates of the school alone and less than 15 minutes later HPD showed up to the school and told them what happened.

One of the first officers on the scene said he and his partner were flagged down by several people in the area where the murder occurred and were told a boy had been stabbed.

He recalled to jurors seeing Josue lying face down in the grass with his backpack still on and blood stains on his clothes. He said he flipped the child over and saw several stab wounds on his chest and neck. The officer described Josue as not being responsive and gasping for air but not seeing his chest move. He described the child's condition as "dire" when he arrived to the scene.

That officer did not turn on his body camera when they arrived to the scene, but his partner did. That video has not been shown in the court.

The fourth person to take the stand was a crime scene investigator. Jurors were shown photos of the crime scene, including one depicting a pool of blood on the sidewalk of Fulton Street in front of a home. The investigator testified that it was 23 feet from the blood on the sidewalk to where the child was found in the grass. Photos showed his zip up Marshall Middle School sweatshirt and his backpack right next to a second blood spot where the initial officer found him.

Jurors were shown the backpack with blood spots on it and hooded sweatshirt in court.

The investigator said he walked the scene with the detectives and took photos of evidence and places they deemed important in the investigation and took blood swabs.

The defense alleged that at witness of the attack told officers he ran after the suspect. When asked, the investigator said he did not travel the path where the possible foot chase took place looking for evidence because he had not been told about it.

Josue's body had 22 wounds, according to the pathologist who conducted his autopsy. He said the child had injuries to his chest, back, arms and legs. The doctor testified this his aorta and lungs were perforated and his liver had a single stab wound.

Jurors were shown photos taken during the autopsy of the 4'10" boy who weighed only 78 lbs.

The deepest wound to Josue's body was 4 inches, according to the pathologist. He said the child likely did not die immediately but it was also not prolonged.

He testified that his injuries were consistent with a knife, possibly a pocket knife.

Josue's manner of death was ruled as homicide and his cause of death was determined to be from multiple sharp force injuries.

The medical examiner's office collected fingernail scrapings to collect any of the assailant's DNA that may have been collected, although he was not sure if testing the samples turned up any evidence.

Prosecutors called at least six people to the stand who provided them with surveillance video from the area. The video was not shown to the jury, but it was introduced into evidence.

RELATED: A 2017 Texas law offers money to help kids get to and from school safely. No districts have applied.
EMBED More News Videos

The Josué Flores Act, a Texas fund designed to provide transportation for children in need, was established after an 11-year-old was murdered while walking home from school in 2016.

The neighbor flagged down other drivers to help Josue and then got into his car and started chasing after the man who stabbed him. Unfortunately, the man got away.

The next day, based on witness tips, Houston police arrested a man. However, he was released two days later after his alibi checked out.

"I'm just tired of hearing my name associated with this case," he said in a recorded video he posted to YouTube.

READ MORE: Josue Flores: Five years later and nobody has been tried for his murder
EMBED More News Videos

May 17th marks five years since 11-year-old Josue Flores was murdered while walking home from school on Houston's north side. Pooja Lodhia is getting an up close look at the case, learning why no one has been tried yet, how Josue's death changed the neighborhood forever, and how his family is keeping his dream to study medicine alive.

"The evidence came back positive that there was Josue's blood on the defendant's jacket," Sgt. Richard Rodriguez said. "Three years had elapsed, and as you know, DNA technology has advanced a lot just in those three years."

The trial could take several days to wrap up.