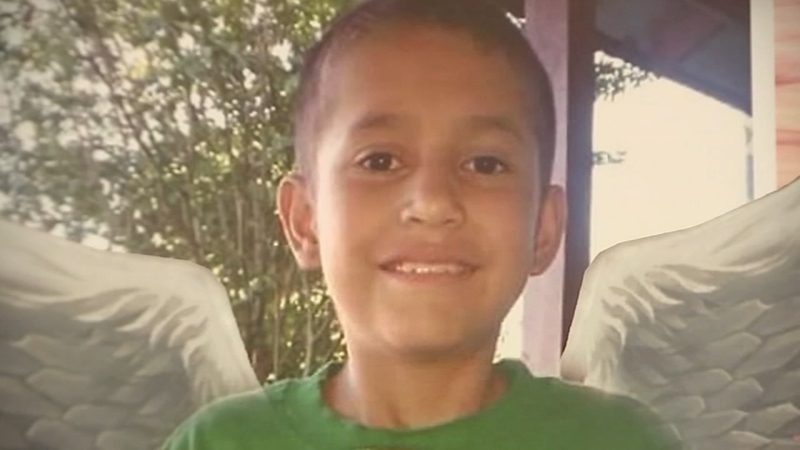 HOUSTON, Texas (KTRK) -- Day five in the trial of Josue Flores' murder brought the week to a close with more expert witnesses and technical testimony.

Josue, 11, was stabbed to death more than 20 times on May 17, 2016, on his way home from school, and more than five years later, the trial is finally underway. Andre Jackson is charged with murder and has steadfastly maintained his claim of innocence.

The lead detective on the case from Houston police returned to the stand. Defense attorneys questioned his methods used to question Jackson during their interview on June 3, 2016. He pointed out the verifiable truths that the defendant gave during his interrogation, such as what school he went to and when.

The detective said the scene of the murder is "burned into his mind" because of the "pure brutality of the murder of an 11-year-old walking home from middle school."

He also said that he found Jackson to be "highly intelligent" during his interview.

RELATED: Defense attorneys focus murder trial on investigation into 11-year-old Josue Flores' 2016 stabbing
Prosecutors called to the stand the HPD officer who executed the warrant for Jackson's DNA on the day of his arrest. He testified that he collected a buccal swab from Jackson and his clothing and took his photo.

Defense attorneys objected to the state's 29th witness, which led to a lengthy meeting between the judge and attorneys from both sides. Ultimately, she decided to allow the woman who specializes in blood spatter to take the stand and testify under certain parameters.

She works for the Montgomery County Sheriff's Office but was contacted by HPD to review photos of the scene. She did not go to the scene in person.

The witness testified to seeing a "drip trail" down the sidewalk where Josue was killed but did not see any sign of gushing blood.

The prosecutor asked the witness if the "absence of seeing blood in a certain way tells a story as well," and she agreed.

The woman said she saw a shoe print at the scene matching the victim's Addidas shoe.

Prosecutors asked the women extensively about how quickly blood dries on the skin. She said it depends on how much blood but is usually in under a minute. Defense attorneys questioned what role humidity can play and she said it could slow the drying process down.


"Would you be surprised at all if you are stabbed from behind that the attacker's shirt wouldn't have blood on it," the prosecutor asked.

"Not at all," the witness responded.

At least two witnesses testified they saw the attacker behind Josue making an upper swinging motion.

The witness said if Josue was hunched over when he was being stabbed, his shirt may have acted like a barrier and absorbed as much blood as it could before it dripped to the ground.

Defense attorneys also questioned her about blood loss if someone was stabbed in their aorta. The forensic pathologist who conducted Josue's autopsy said his was perforated. She said she did not expect there would be a large amount of blood that would fall to the ground. It is more likely for internal bleeding.

The woman also used a specialized camera to photograph Jackson's clothes that would allow her to see if there was blood on any of it. She testified that she did not see any.

A supervisor at the DPS lab in Houston tested the items found on Josue at the scene, including his clothes, and said she did not find any evidence of Jackson's DNA on it.

She also testified Friday afternoon that they tested Jackson's green jacket, black sneakers and shoe laces. They did not find any blood on his clothes.

Several areas of Jackson's green jacket did not show any sign of Josue's DNA. The results for inside and outside of the cuffs of his sleeves came back inconclusive, the woman testified.

Defense attorneys pointed out that several people were involved in the testing and questioned if they all took proper precautions to not cross contaminate evidence.

At the time of the testing, the witness said DPS was in the process of upgrading their systems to more advanced technology.

Just before the jury broke for the day, two witnesses took the stand. The first was is the chief scientific officer for a private DNA testing lab in Florida that she testified is also accredited in Texas.

She said they are able to bring new technology online quicker since they are a private lab.


After only five minutes on the stand, the witness was asked to step down and the HPD cold case sergeant who got in touch with the Florida lab was called.

He said the cold case division was assigned the case in March of 2019.

Not long before, he went to a conference in Baton Rouge and said he heard about new DNA testing technology that one of the sponsors had called M-vac.

He contacted the lab and sent over frozen DNA extracts for further testing.

The HPD sergeant was on the stand for less than 15 minutes before court concluded for the week.

While jurors were not able to hear exactly what the DNA lab in Florida found during their testing, the defense said during opening statements that touch DNA linked Jackson to the crime. They argued that it was found in a Florida lab that has lower standards than Texas.

Touch DNA was said by one of the witnesses to be skin cells, which are more easily wiped away.

DNA evidence is what allowed the DA's office to re-file charges against Jackson after the murder charge was dropped in 2017 for insufficient evidence.

Jurors were asked to return Monday to continue. It is possible the state will rest sometime that day.