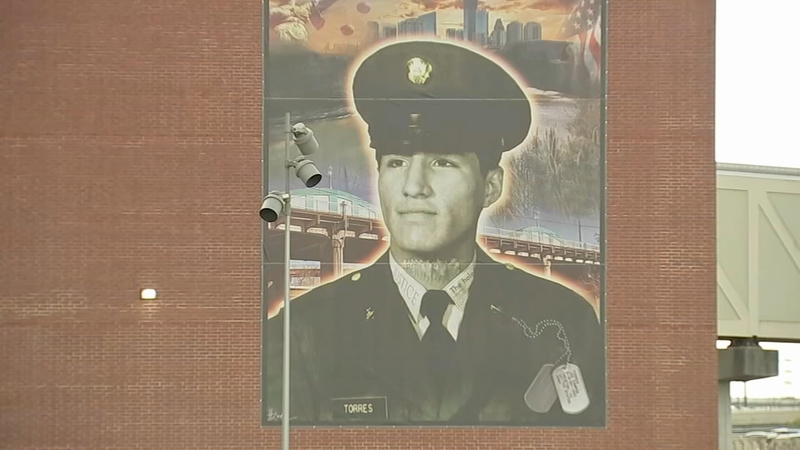 Houston dedicates plaza to man killed by HPD 45 years ago

HOUSTON, Texas (KTRK) -- A Vietnam war veteran killed by Houston police nearly 45 years ago will have a public plaza downtown dedicated in his honor.

The City of Houston is dedicating a new trail, park and plaza in memory of Jose "Joe" Campos Torres, the Vietnam Veteran who was brutally murdered in 1977.

On Saturday afternoon hundreds of people, and city county leaders rallied around Torres' family as they returned to Buffalo Bayou where Torres was beaten and dumped in the bayou by Houston police officers 45 years ago.

The City of Houston unveiled the Joe Campos Torres Memorial Plaza and trail along Buffalo Bayou.

"This day is not only important for our family but for all the families that have had to deal with police brutality," Torres' cousin, Arthur Navarro, said to the crowd. "This memorial will be the next best thing to justice for our family and hopefully help future generations of young people."

Mayor Sylvester Turner and Houston Police Chief Troy Finner publicly apologized to Torres family members over Memorial Day weekend in 2021. Both spoke at the dedication event, remembering where they were when they heard of the brutal murder of Torres and the Moody Park riots that followed.

"I was 10 years old when it happened," Finner said. "So when I found out the family hadn't received a simple apology. My mom and dad taught me, if you're wrong, just say it. It brings about healing. So I want to thank the Mayor for when we had that conversation. He said, 'Absolutely, lets do it.' And you deserve it. Mama Torres thank you so much, because today is about you and this entire family."

"Today is just to celebrate my uncle, Joe Campos Torres. My moms brother. I know she's been hurting and my grandmother has been hurting for the longest time, but now they can finally have some peace," Carreon said.

The site will be under construction for the final finishes.

Torres was arrested at a bar for disorderly conduct on May 5, 1977.

After taking him to jail, police were ordered to take Torres to the hospital. Instead, police took Torres to a place known at the time as the "The Hole."

That's where police beat Torres and left him to die in the bayou. His body washed up on the banks a short time later.

The officers responsible for his brutal murder were convicted of negligent homicide, sentenced to one year of probation, and were fined $1 for the crime.

"Nothing. No apology for us," said his sister, Sandra Torres. For more than four decades, the Torres family was never offered a public apology for what happened until June 2021.

Finner stood before Torres' loved ones and said, "There was no justification for what happened that night."

"That's a straight-up murder," said Finner. "I stand with his family, and I stand with all families who have suffered injustices of police officers."

Turner said in a statement:

"I am thankful for everyone who has made the Jose Campos Torres plaza a reality. Saturday's dedication will represent years of healing. Last Memorial Day, I joined Police Chief Troy Finner to apologize to his mother and other loved ones on behalf of the city of Houston.