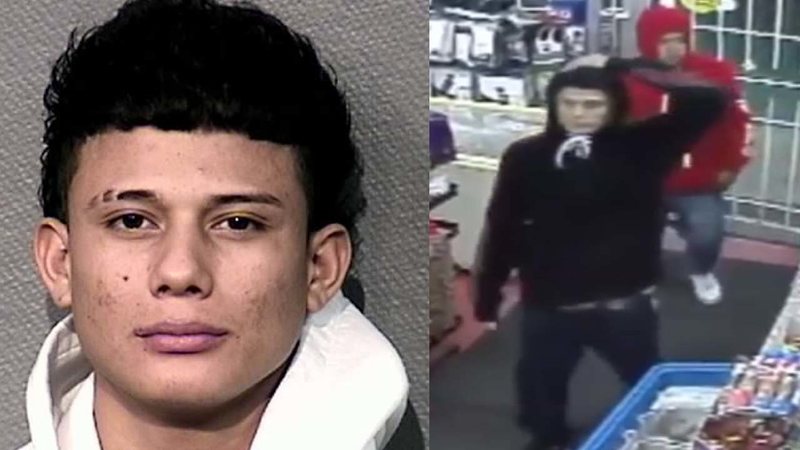 HOUSTON, Texas (KTRK) -- A teenager has been arrested for the murder of a beloved convenience store clerk.

Jose Bonilla-Ortiz, 18, was arrested Saturday and charged with shooting Faruk Bhuiya during a robbery on Nov. 10 at the Metro Food Mart in the Spring Branch area.

UPDATE: Just-released booking photo of Jose Bonilla-Ortiz, 18, arrested & ID'd as the shooter. Now charged with murder in this case. He's wearing the dark hoodie in the surveillance video/photos. We still need help ID'ing & finding the other suspect (in the red hoodie). #hounews pic.twitter.com/kyHNsNZLrO

Bonilla-Ortiz is seen wearing a dark hoodie in the surveillance video. The second man, in the red hoodie, has yet to be identified.

A teen was arrested and charged with the murder of a convenience store clerk.

Bhuiya and his wife shared a house right behind the convenience store on Witte Road. The two were married less than two years.

Bonilla-Ortiz, who has no prior criminal history in Harris County, is set to go back before a judge Monday afternoon after making his first court appearance on Sunday.

According to details released in court, Bonilla-Ortiz and Bhuiya struggled over a security door that the victim tried to close after Bonilla-Ortiz ran to the cashier area.

Bonilla-Ortiz put his weapon between the door and door jam, fired once and struck Bhuiya in the face, court records show. Bhuiya died at the scene.