The star second baseman was replaced on the field by Aledmys Diaz and in the batting order by rookie Jeremy Peña on Tuesday night.
KTRK 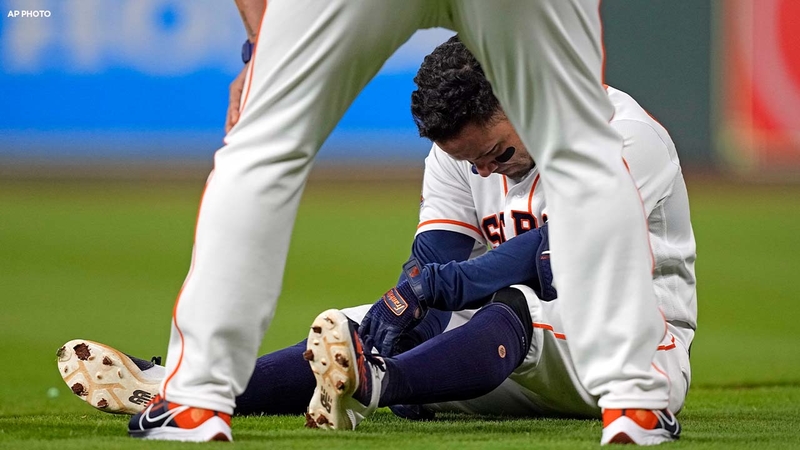 HOUSTON, Texas (KTRK) -- Time seemed to stop for Astros fans when team leader Jose Altuve went to the ground and winced in pain after legging out an infield hit on Monday night.

But the pain on the former MVP's face, not to mention the pain in fans' minds of potentially losing a star early in the season, can subside for now.

The Astros placed their second baseman on the 10-day injured list, backdated to April 19. The team listed Altuve's injury as a left hamstring strain.

The injury took place in the bottom of the eighth inning of Houston's series-opening win against the Los Angeles Angels.

Altuve told reporters after the game that he was "feeling better," but wanted to see how serious the injury was through tests.

The duration of Altuve's time on the IL is a bit of good news for the team. Common recovery times for mild to moderate strains range from three to eight weeks, according to sports medicine experts.

The timetable puts Altuve's potential return to the lineup on April 29 when the team travels to Toronto for the start of a series with the Blue Jays.

On Tuesday, Houston replaced Altuve on the field with utility player Aledmys Diaz and in the batting order with rookie shortstop Jeremy Peña in the leadoff. Infielder Niko Goodrum will man second base in the Astros' series-closing game against the Angels on Wednesday.

Altuve, 31, who is in the 11th year of MLB service, also sustained a hamstring injury mid-way into the 2019 season. He has also been sidelined with knee-related issues as far back as 2018.

Did you cop?! When the threads dropped over the weekend, the team store was full of fans ready to grab the new hats, jerseys and T-shirts complete with those throwback rainbow colors piped in.