'These 2 stars gave our kitchen memories of a lifetime': Astros surprise restaurant employees 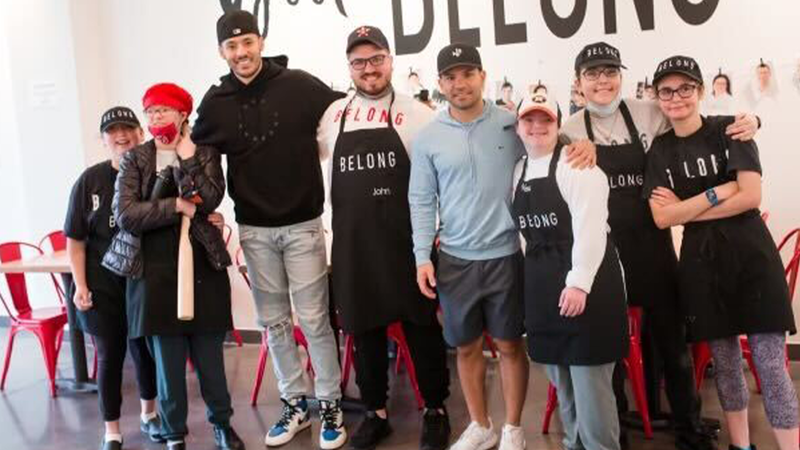 HOUSTON, Texas (KTRK) -- Even with the start of Major League Baseball's spring training, and potentially the regular season in jeopardy due to the ongoing lockout, Astros superstar Jose Altuve is still managing to bring smiles to the faces of local fans.

As documented in an Instagram post by Houston's Belong Kitchen, a neighborhood grab-n-go kitchen that employs adults with intellectual and developmental differences, one of the store's employees recently saw Altuve in a parking lot of a nearby shopping center Wednesday. When Ellie, an employee and daughter of Belong Kitchen founder Kim Brown, asked if the All-Star second baseman would sign her hat, neither one of them had a marker.

So, Altuve immediately offered to drop by work the next day to bring a Sharpie and follow through on Ellie's autograph request. He even set an alarm on his watch to make sure to arrive during her shift.

"If you come, you better bring Correa with you!" Ellie told Altuve.

The players arrived with autographed baseballs for the staff and a signed bat for Ellie. The duo took pictures with employees and volunteers of the non-profit, who were gifted hats, T-shirts and dinner before they left.

"We are so grateful they would take time out of their busy schedules to do this for Ellie and our employees," Brown told ABC13 Saturday. "So many people in this town look up to the Astros, and these two stars gave our kitchen the memories of a lifetime."

Brown said she wasn't sure if Altuve and Correa were aware of the purpose and IDD focus of Belong Kitchen, but it's what she said made it even more meaningful.

"Ours is a group of society that's often overlooked," Brown added. "So, it's wonderful Jose and Carlos made the effort to make an impact. It won't ever be forgotten."

Marlo of Marlo Wise Photography was there to capture the moment.