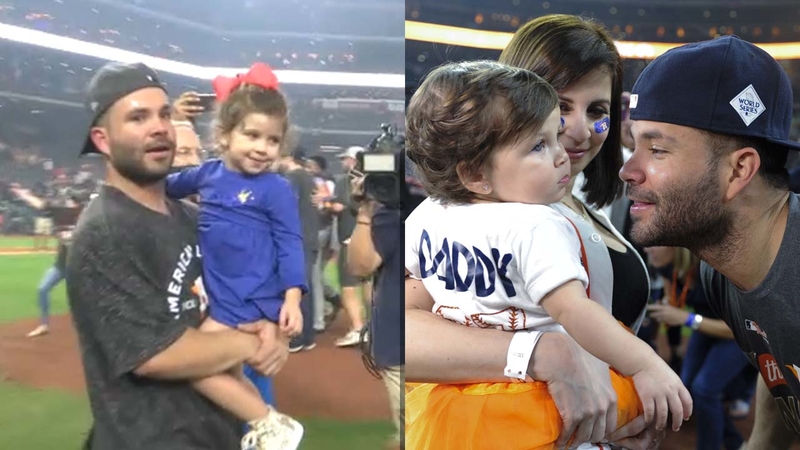 HOUSTON, Texas (KTRK) -- Wednesday is a big day for the Astros and their fans but it's an even bigger day for slugger Jose Altuve and his family.

Some of the sweetest moments from the Houston Astros' postseason so far have been courtesy of the players with their families, especially Altuve and his daughter Melanie.

His daughter is often spotted running into her daddy's arms, with one of the most recent heartwarming occasions coming after the team advanced to the American League Championship Series, and then to the 2019 World Series.

While fans are getting ready to watch the cut-throat game between the Astros and Nationals, the Altuve family is celebrating little Melanie's third birthday.

Partying for Melanie's birthday while in the midst of a World Series whirlwind is probably starting to feel par for the course for the second baseman and his family.

Melanie turned one just as the team secured the trophy for the first time in 2017.

My family spent a magical day at @WaltDisneyWorld. Don’t miss the opening of #ToyStoryLand on June 30th! #ad pic.twitter.com/XzqsFsHkdk

For her second birthday, she stole our hearts with an adorable birthday photo shoot.

Last year, Altuve's wife, Giannina Altuve, took to Instagram to share a collection of cute photos shot by Betty of Bettyabsh Photography. Melanie posed with balloon and flower bouquets along with a stunning backdrop of the Houston skyline to celebrate her two years of life.

Now, more World Series hardware could be in the toddler's future, and we have to say, that'd be some birthday gift!