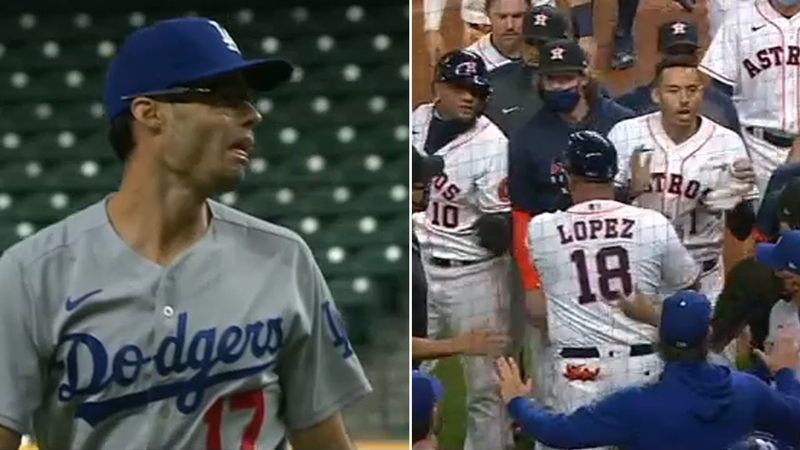 HOUSTON, Texas (KTRK) -- Los Angeles Dodgers pitcher Joe Kelly has been suspended for eight games by Major League Baseball for throwing a pitch in the area of the head of Houston Astros star Alex Bregman.

MLB said in a release that Kelly, who has been suspended before for throwing at players, also taunted Carlos Correa.

MLB also hit Astros manager Dusty Baker's pocketbook, a fining him as part of a benches-clearing incident between the two teams.

"Balls get away sometimes but not that many in the big leagues," Baker said. "When you throw a 3-0 fastball over a guy's head you're flirting with ending his career." 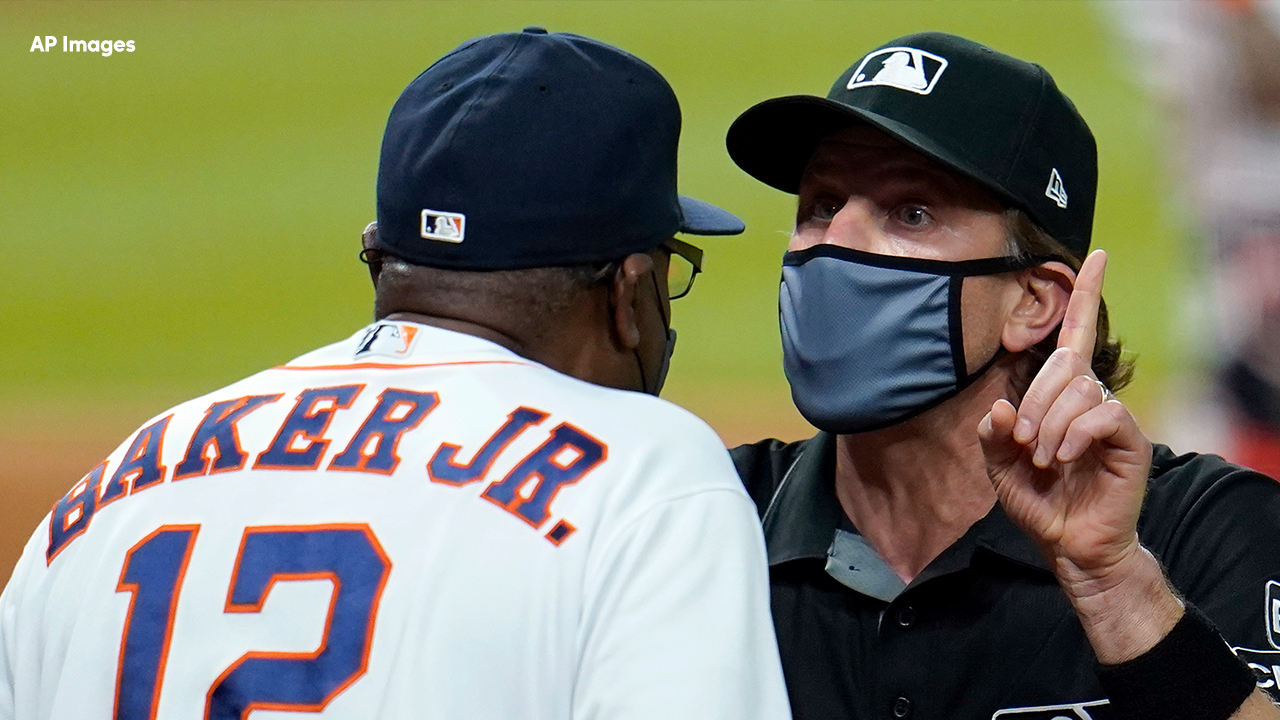 Umpire Chris Guccione talks to Houston Astros manager Dusty Baker after both benches emptied onto the field after the sixth inning.

The Dodgers had a 5-2 lead after a five-run fifth when Kelly, who was with Boston in 2017 and also faced Houston that postseason, threw behind Bregman for ball four. Bregman grimaced after jumping to avoid being hit, then trotted to first base.

There were two outs in the inning when Kelly threw an errant breaking ball over Correa's head. Correa, who homered and finished with three hits, took off his batting helmet and stared Kelly down before continuing the at-bat.

Kelly struck out Correa, then stuck out his tongue and made a face in his direction. Correa started walking toward him and the players exchanged words, prompting the benches to clear in the first such incident of this pandemic-delayed season. There was plenty of yelling and crowding - outlawed as MLB tries to play a 60-game season amid the pandemic - but there was no pushing or punches thrown. 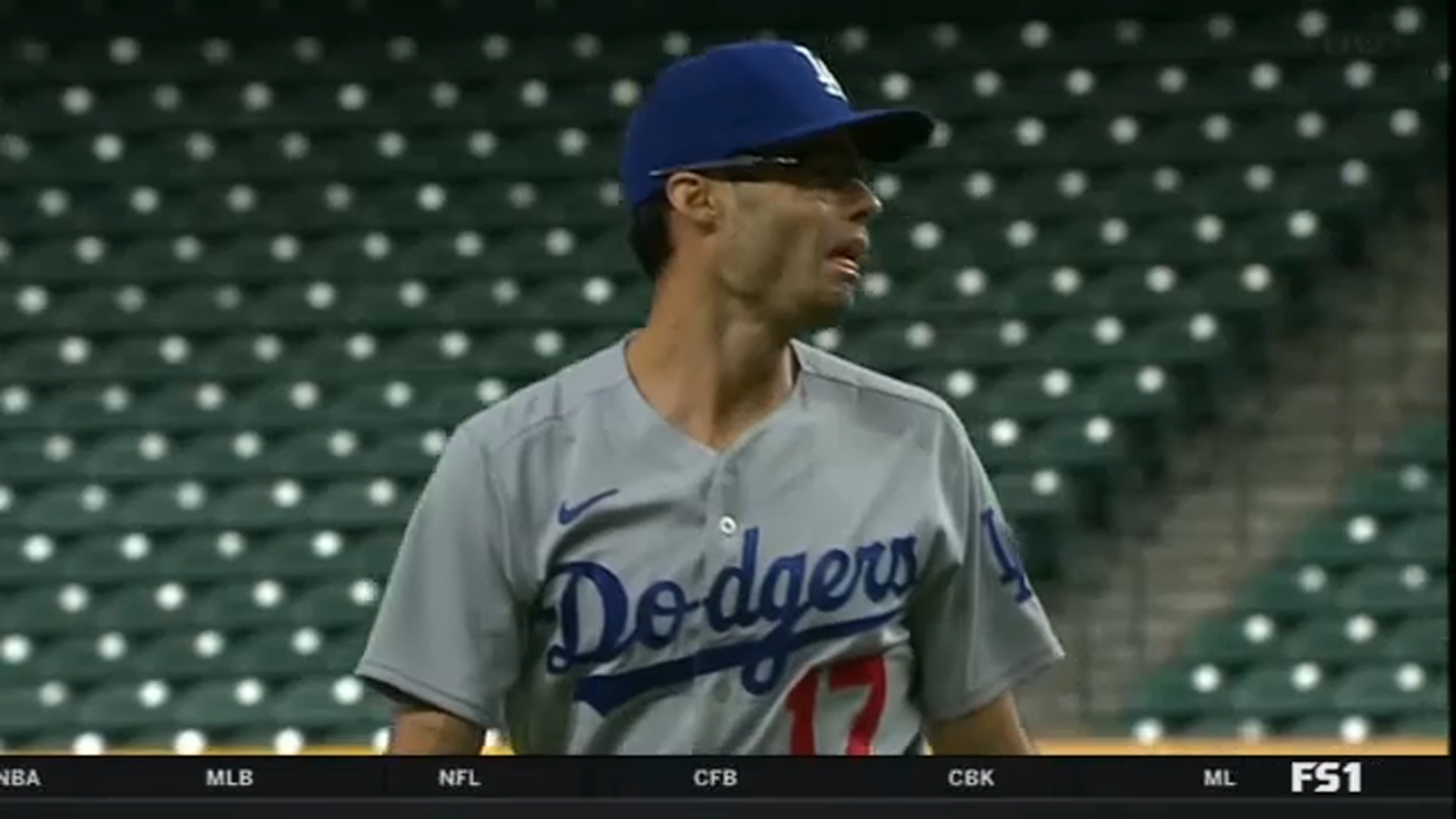 Joe Kelly struck out Carlos Correa, then stuck out his tongue and made a face in his direction.

MORE: Astros should be stripped of championship, former Dodger says

Baker said things really got out of hand because of something he said Kelly told Correa after the strikeout.

"What really enraged everybody ... is when he told him: 'Nice swing (expletive),'" Baker said. "What are you supposed to do then?"

Baker was asked if the Astros said anything to provoke Kelly.

"We didn't say anything," he said. "We don't start nothing. But we don't take nothing either."

The Dodgers and Astros cleared the benches after Joe Kelly struck out and exchanged words with Carlos Correa. pic.twitter.com/Z2l2A1sMG6

Alex Bregman isn't the only Houston Astros getting nicked during spring training.

Kelly denied that he purposely threw at the Astros. He was asked if there was any added motivation Tuesday since his Red Sox team lost to Houston in the AL Division Series in 2017.

"No. When I was with the Red Sox we beat them in '18," he said. "It's one of those things that I pitch competitively. With no fans here, it's easy to hear some stuff (from the opposing dugout) ... there's something they apparently didn't take too kind to."

Roberts wasn't sure if Kelly's errant throws were retaliation for Houston's cheating. 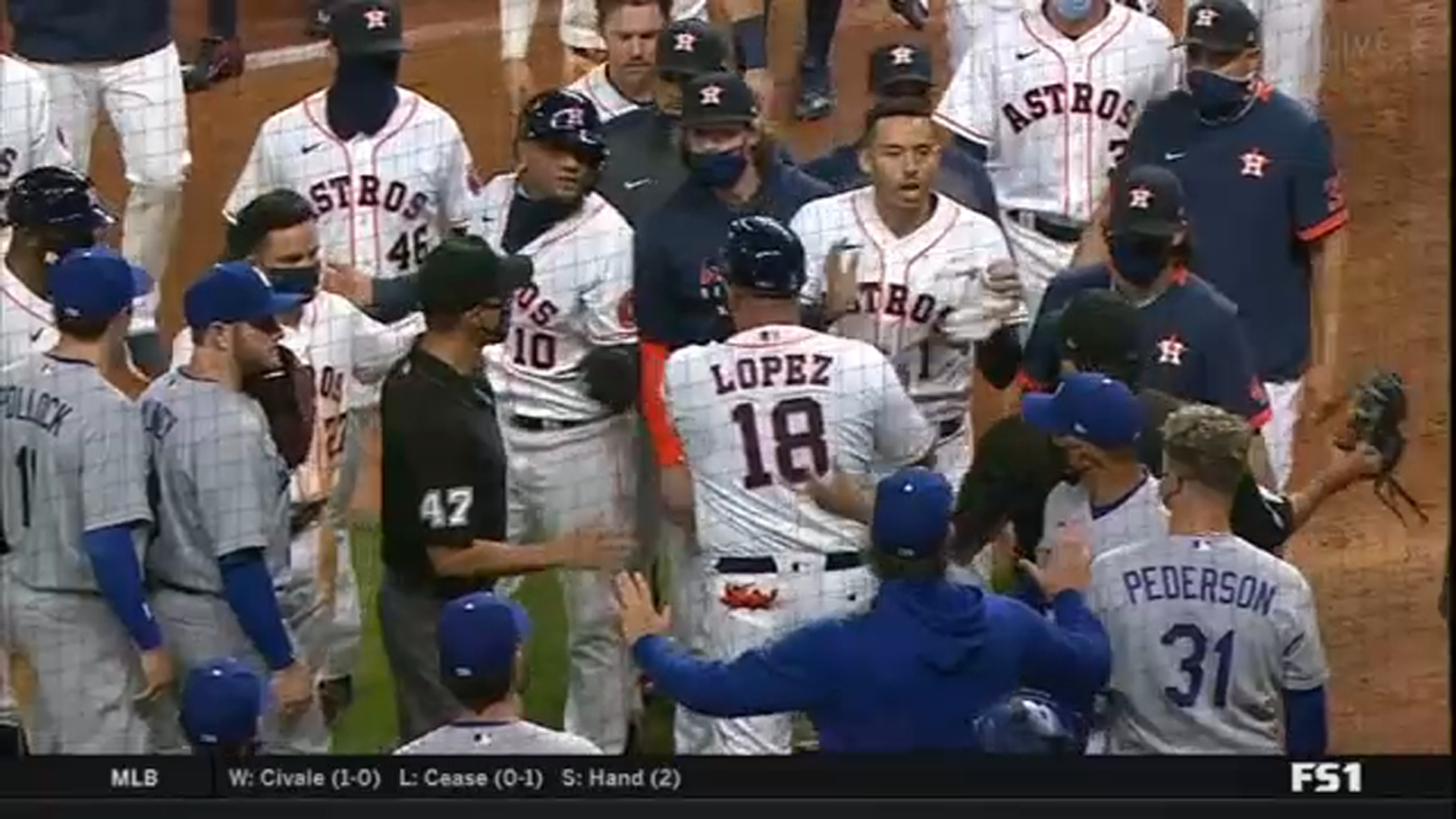 Conflict arises on the field as Dodgers' and Astros' benches clear after a pitch toward Carlos Correa.

"I really don't know, to be quite honest," he said. "I know he got behind Bregman 3-0 and lost a fastball. I really don't think there was intent behind that. I think those guys took a little bit of offense. Even the one to Correa, that was a breaking ball that just backed up."

"Obviously the expectation going into the series that things were kind of escalated maybe a little, I don't know if prematurely's the word, but that's kind of what happened."

Order was restored after a couple of minutes and there were no ejections, but Baker was still upset before play resumed and got in the face of an umpire.

Bregman avoided questions about the incident postgame and Correa did not speak to reporters.

#Astros Bregman on pitch from Joe Kelly that went behind his head... "I don't know if he was or wasn't" throwing at me.
Bregman says the 'Stros will control what they can control.

Houston was punished by the commissioners' office in January for the sign-stealing scheme, which led to the firing of general manager Jeff Luhnow and manager AJ Hinch. But many players around the league were unhappy that no players were disciplined for their roles in the cheating. 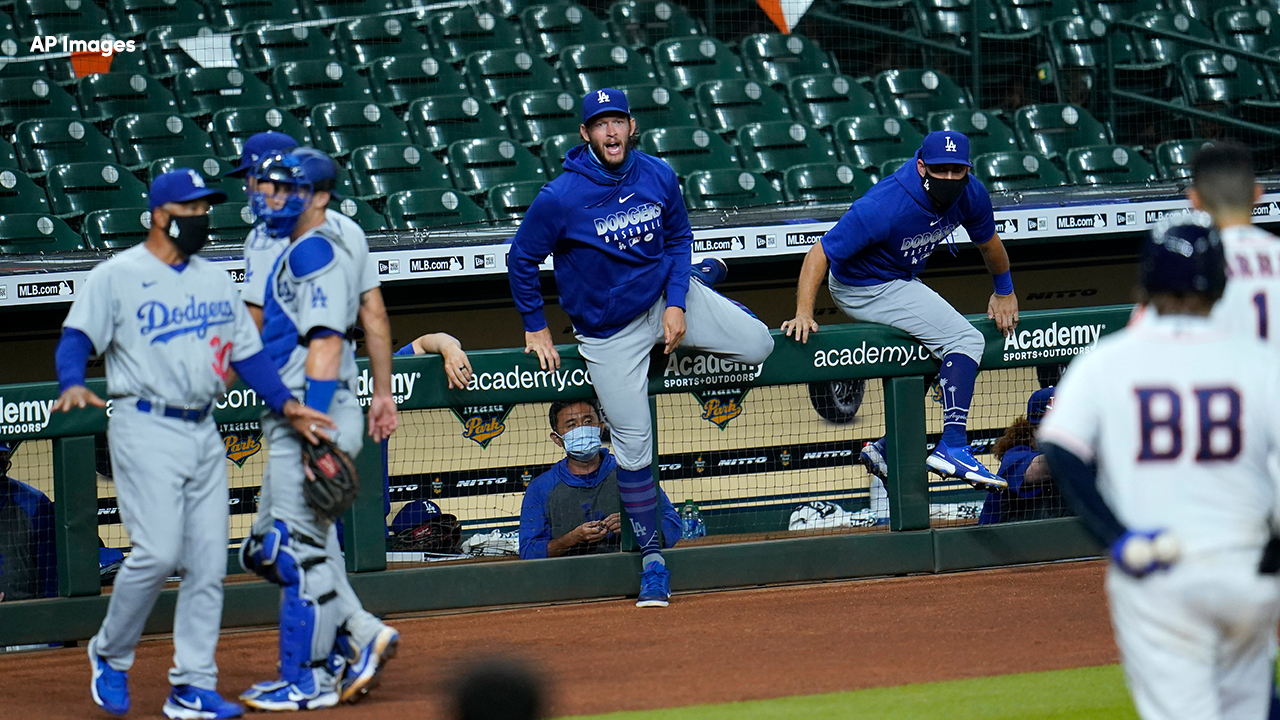 Dodgers' Clayton Kershaw comes over the dugout railing with other players during an exchange with Astros' Carlos Correa after the sixth inning.

The Dodgers had harsh words for the Astros during spring training, but Roberts said before the game that he didn't think his team would retaliate.

Pitcher Justin Verlander was traded to the Astros from the Detroit Tigers in 2017 and was named ALCS Championship MVP. Here is what you need to know about this Houston favorite.