Jeff Bezos stepping down as Amazon CEO, will be succeeded by Andy Jassy 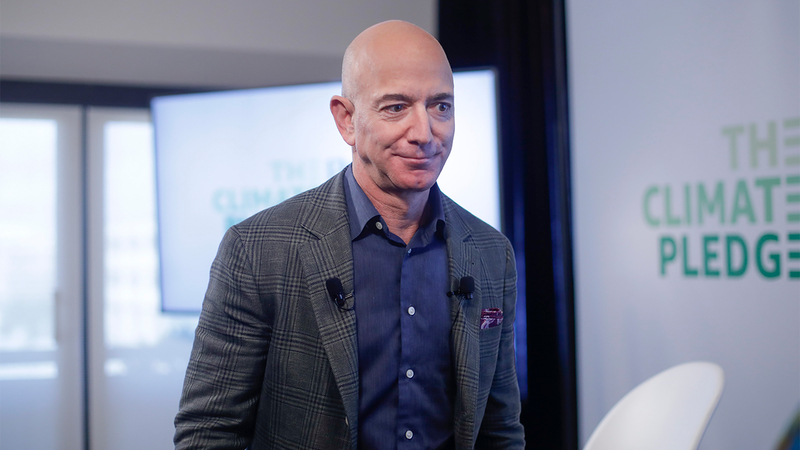 SEATTLE -- Amazon founder Jeff Bezos will step down from his role as chief executive later this year and transition to the role of executive chair, the company said Tuesday. He will be replaced by Andy Jassy.

Bezos has been Amazon's CEO since its founding in 1995. He oversaw its growth from an online bookseller into a $1.7 trillion global retail and logistics behemoth, which has also made Bezos into one of the world's richest people. Jassy has worked for Amazon since 1997 and currently serves as CEO of the company's cloud business, Amazon Web Services, its biggest profit driver.

"This journey began some 27 years ago. Amazon was only an idea, and it had no name," Bezos wrote letter to employees Tuesday. "The question I was asked most frequently at that time was, 'What's the internet?' ... Today, we employ 1.3 million talented, dedicated people, serve hundreds of millions of customers and businesses, and are widely recognized as one of the most successful companies in the world."

The news came as part of Amazon's fourth-quarter earnings report. The company handily beat Wall Street analysts' projections for both sales and profit, capping a banner year as the pandemic boosted its retail and cloud businesses.

In 1999, Jeff Bezos sat down with ABC7's Alan Krashesky to discuss his website, Amazon.com.

The company's shares were essentially flat shortly after the market closed Tuesday, but gained nearly 2% just over an hour after the closing bell. Amazon's stock has grown nearly 69% over the past year.

Amazon posted quarterly net sales of $125.6 billion, up 44% from the same period in the prior year and well ahead of the $119.7 billion Wall Street analysts had projected.

Net income in the quarter hit $7.2 billion - nearly double the $3.7 billion Wall Street predicted and more than double the $3.3 billion in income the company earned in the year-ago quarter. Earnings per diluted share were $14.09.

The quarterly results include sales from Prime Day, which was held October 13-14 after being postponed over the summer because of the pandemic. Sales from Prime Day, as well as continued demand for online shopping as Covid-19 cases surged, contributed to 40% year-over-year growth in Amazon's net sales in North America, which totaled more than $75 billion. International sales jumped 57% to nearly $37.5 billion.

Amazon said it delivered more than a billion products to customers worldwide during a "record-breaking holiday season."

Revenue from Amazon Web Services grew 28% from the prior-year quarter to more than $12.7 billion, which the company attributed to "significant customer momentum," including new commitments and migrations to the cloud by the likes of JPMorgan Chase, Twitter, Metro-Goldwyn-Mayer, among others. AWS posted full year revenue of more than $45 billion and operating income of $13.5 billion.

"AWS is well on its way to creating an annualized $50 billion revenue company," Patrick Moorhead, principal analyst at Moor Insights and Strategy, said in an emailed statement. "This makes AWS larger than Salesforce.com and SAP combined. Equally impressive is that AWS delivered over half of the company's operating profit."

"Amazon is what it is because of invention," Bezos said in a statement. "We do crazy things together and then make them normal. We pioneered customer reviews, 1-Click, personalized recommendations, Prime's insanely-fast shipping, Just Walk Out shopping, the Climate Pledge, Kindle, Alexa, marketplace, infrastructure cloud computing, Career Choice, and much more ... When you look at our financial results, what you're actually seeing are the long-run cumulative results of invention."

Bezos said in his Tuesday letter that he is excited for the transition, which will free up more time for him to work on outside projects. As executive chair of Amazon, he will focus on "new products and early initiatives," he said.

"Being the CEO of Amazon is a deep responsibility, and it's consuming," Bezos wrote. "When you have a responsibility like that, it's hard to put attention on anything else. As Exec Chair I will stay engaged in important Amazon initiatives but also have the time and energy I need to focus on the Day 1 Fund, the Bezos Earth Fund, Blue Origin, The Washington Post, and my other passions. I've never had more energy, and this isn't about retiring. I'm super passionate about the impact I think these organizations can have."

He added that Jassy "will be an outstanding leader, and he has my full confidence."

Jassy is an obvious choice for the top job, especially after Jeff Wilke, the head of the company's worldwide consumer division and another veteran Amazon leader, announced his retirement in August. Jassy is a longtime member of Amazon's elite leadership group, the "S-team," and has overseen the growth of AWS into a cash cow and the world's biggest cloud computing provider.

The cloud computing market is expected to expand even further in coming years as the pandemic accelerates companies' adoption of cloud, as they aim to be more effective in an era of digital-first interactions.

"Andy Jassy stepping into the CEO role at Amazon is a natural fit," Tim Hubbard, assistant professor at the University of Notre Dame's Mendoza College of Business said in an emailed comment. "Amazon Web Services is a powerhouse within the company, driving a lot of profitability. The transition may indicate that for the core of the company, it's going to continue down the path it's going."