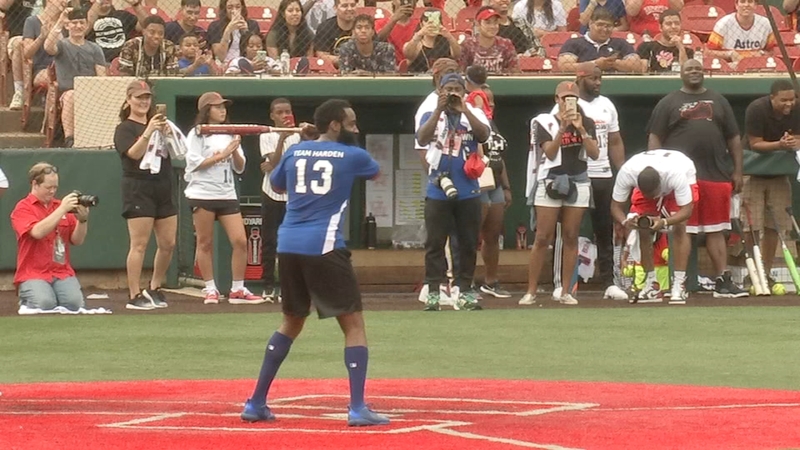 HOUSTON, Texas (KTRK) -- Between becoming a pro sports owner and reuniting with a former teammate, James Harden's summer is winding down the only way it has been since 2017.

The third edition of Harden's JH-Town Weekend began Friday night with a charity concert at the Revention Music Center. The lineup was kept secret, so eager Harden fans got more incentive to buy in to the show.

Artists such as Travis Scott and YG performed in front of thousands on Friday. Harden and newest Rocket Russell Westbrook took the stage and showed off some moves with YG, which made the rounds on social media.

On Saturday, Harden was at Tuffy Park and delivered more than 100 bikes to kids in the area. That wasn't the only giving Harden did on Saturday.

He also announced that he is donating over $240,000 to the city of Houston in order to renovate basketball courts in under-served areas that were damaged by Hurricane Harvey.

Harden said with how much Houston has embraced him over the last eight years, it's easy to give back to the community.

The weekend concluded Sunday at Schroeder Park on the University of Houston campus, where a celebrity softball game took place.

Over 3,000 fans waited out the rain delay to watch Harden and others show their skills on the diamond.

Harden's opposition didn't exactly worry when he came up to bat. At one point, the entire team sat down and got on their phones when Harden stepped up to the plate.

Harden would actually make contact, and the entire team got up. He even got an RBI single.

The softball game replaced the basketball component of past years. And, of course, the weekend served as a birthday party for the former MVP, who turns 30 on Aug. 26.