'I fit right in': Russell Westbrook-era with Houston Rockets begins 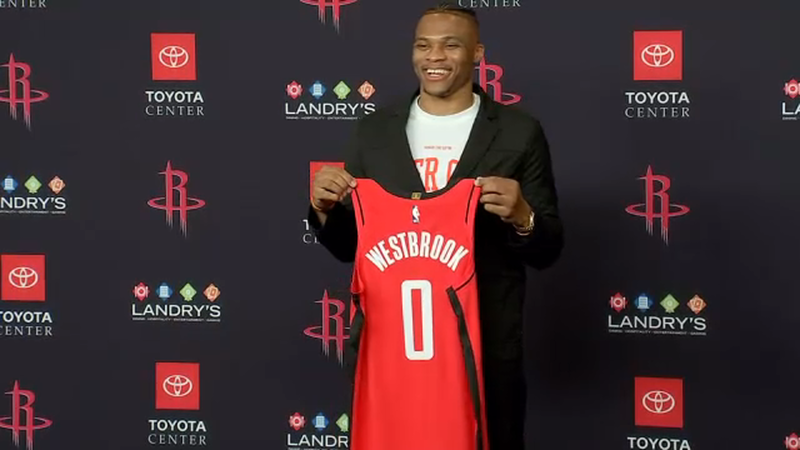 HOUSTON, Texas (KTRK) -- "I care about one team, and it's the Houston Rockets."

With those words, the Russell Westbrook-era in H-town lifted off, with general manager Daryl Morey as the only team official to introduce the superstar point guard.

The usually bombastically dressed former MVP walked in to the media room at Toyota Center clad in a simple T-shirt and black jacket, ready to answer expected questions on sharing the ball now that he and James Harden are on the same team.

"Me and James have been friends for many, many years, since I was 10 actually," Westbrook alluded to his three-year backcourt combination in Oklahoma City and their time together playing youth league in the Los Angeles area. "To be able to win some, you have to be able to sacrifice some parts of your game. And we both understand that."

General manager Daryl Morey was the only team official to introduce Westbrook.

The former NBA MVP was acquired in a trade that was made official July 16. The Rockets are sending Chris Paul, two future first-round picks, and the rights to two first-round swaps to the Oklahoma City Thunder.

Westbrook finished up his 11th season in the NBA, averaging a triple-double in points, assists and rebounds. This was the third time in his career that he reached those marks.

In addition, Westbrook gets to reunite with James Harden, his former Oklahoma City teammate. Their last professional game together was in the 2012 NBA Finals.

Since the trade was first reported on July 11, Harden has expressed how Westbrook wasn't happy with his recent playoff futility with the Thunder. In addition, Westbrook was spotted in Houston ahead of the official trade announcement.