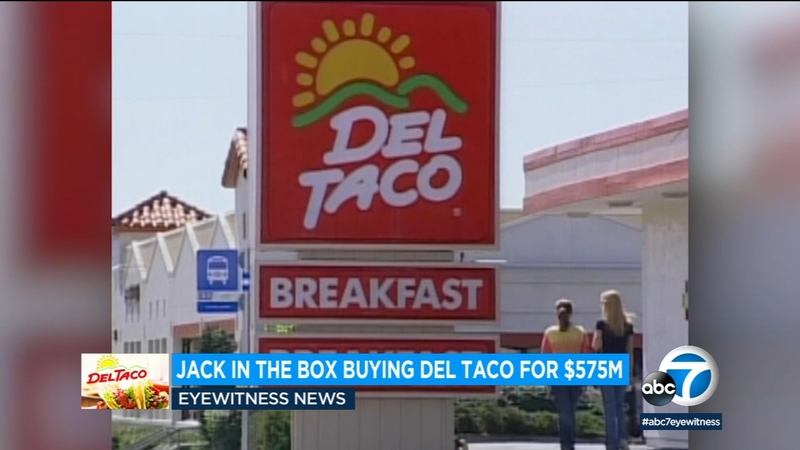 Three years after ditching Qdoba Mexican Eats, Jack in the Box is scooping up Del Taco in a $575 million deal.

The deal, which is expected to close early next year, doubles down on Jack in the Box's success with tacos.

Jack in the Box serves an eclectic array of food from burgers to egg rolls, but the chain has made something of a name for itself with its tacos - and despite getting mixed reviews, they've long been atop-selling item for the brand.

Del Taco could be seen as the reverse: It specializes in tacos, quesadillas and other American-style Mexican fare, but it also sells American dishes like burgers.

Together, the California-based brands will have over 2,800 restaurants in 25 states and will be better positioned to compete with large quick-service restaurants, the companies said.

"Joining forces will provide additional resources to drive innovation to create more unique, innovative menu items and exceptional guest experiences," Jack in the Box CEO Darin Harris said during a Monday analyst call discussing the deal. "This will allow Jack and Del Taco to better engage with their existing guests and reach new ones."

Jack in the Box acquired the fast-casual Mexican chain Qdoba in 2003 and announced the decision to sell it in 2017 after the brand had been struggling with declining sales, closing the deal the following year.

Del Taco will be a better fit, said Harris on Monday, because it attracts customers similar to those who already shop at Jack in the Box, operates in the same markets and has a similarly hefty drive-thru business: 99% of Del Taco restaurants have a drive-thru, compared with about 90% Jack in the Box locations.

That's a "key differentiation" from Qdoba, which doesn't have many drive-thrus, Harris added.

The drive-thru has become increasingly important to fast-food restaurants during the pandemic, when many customers felt safer in their cars than restaurants. That interest has only grown: A Technomic consumer survey found about 52% of quick-service restaurant orders were placed in drive-thrus in August 2021, compared to about 42% in January 2020.

Jack is one of many restaurant chains expanding its portfolio lately. Restaurant Brands International -- which owns Burger King, Popeyes and Tim Horton's - said in November that it is buying Firehouse Subs. Other recent deals include Johnny Rockets and Fatburger owner FAT Brands announcing it will buy Native Grill & Wing, while BurgerFi is buying Anthony's Coal Fired Pizza & Wings from L Catterton.