How is India the tiger adapting to his new north Texas home? 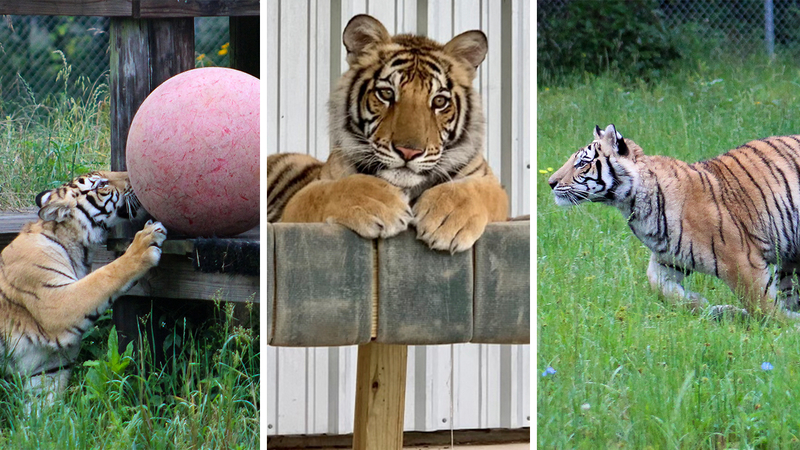 How is India the tiger adapting to his new north Texas home?

MURCHISON, Texas (KTRK) -- The tiger re-captured after a days-long search and a wild encounter in a Houston neighborhood is settling into his new home in north Texas.

The Cleveland Amory Black Beauty Ranch in Murchison is giving an update on India the tiger.

India has a large, naturally-wooded half acre habitat at the sanctuary.

"India is a confident boy, and in his large space he is relishing in his freedom, and acting like the curious, lively young tiger he is. He already found a large log that is clearly his favorite, and enjoys stretching, scratching and marking his scent. He bounces around the habitat exploring all of the new smells and stalking his toys in the thick tall grass, illustrating his wild instincts," said Noelle Almrud, senior director of Black Beauty. "He is having a great time in his pool, particularly batting at the waterspout, and spending time exploring the hills, platforms and other enrichment- including a big red ball he ambushes as he leaps from behind bushes to try to get it. He watches his new neighbors curiously - tigers and a black bear from afar in their own habitats. He continues to thrive and is eating well."

The ranch is approximately 200 miles north of Houston near Athens, Texas.

The man linked to the tiger, Victor Cuevas, is out of jail and wearing an ankle monitor.

He bonded out of the Fort Bend County jail for a murder charge his lawyer says he is not guilty of.

Cuevas is still facing evading charges in Harris County related to the tiger.

ORIGINAL STORY: Murder suspect who was linked to tiger in west Houston has been arrested on evading charges