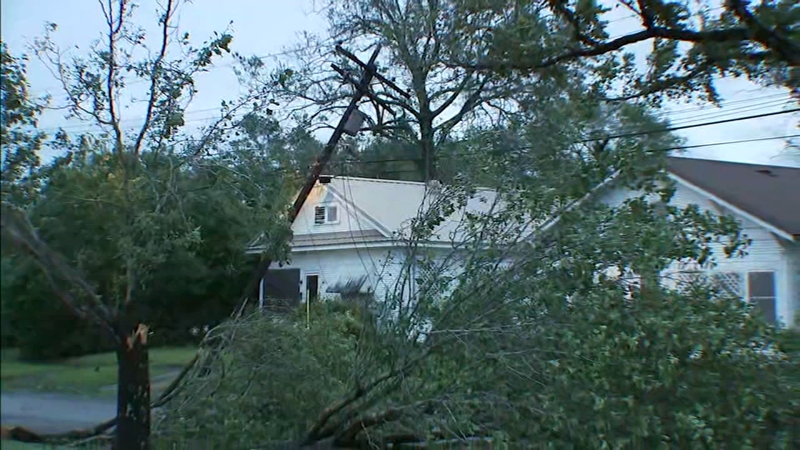 ORANGE, Texas (KTRK) -- People in Orange, Texas, left their homes boarded up, said a prayer and hoped for the best as the center of Hurricane Laura passed approximately 30 miles to the east.

Thursday morning, the rising sun revealed the damage left behind.

Though not as hard hit as neighboring cities across the Sabine River in Louisiana, the town of nearly 20,000 was still left littered with debris and downed trees and utility lines.

Orange mayor Larry Spears told ABC13 the damage could have been a lot worse. Some businesses lost roofs but he expected worse.

Virtually all of Orange County was without power as people began to survey what was left behind by the storm.

7:27 am — here’s the small community of Pinehurst, outside Orange. Several buildings lost their roofs. This is MLK Dr. #abc13 #laura pic.twitter.com/HcU0riN5qj

The National Hurricane Center said Laura slammed the coast with winds of 150 mph at 1 a.m. as a Category 4 hurricane near Cameron, Louisiana, a 400-person community about 30 miles southeast of Orange.

Forecasters expected a weakened Laura to cause widespread flash flooding in states far from the coast. An unusual tropical storm warning was issued as far north as Little Rock, where forecasters expected gusts of 50 mph and a deluge of rain through Friday. After turning eastward and reaching the Atlantic Ocean, it could again become a tropical storm and threaten the Northeast.

Laura was the seventh named storm to strike the U.S. this year, setting a new record for U.S. landfalls by the end of August. The old record was six in 1886 and 1916, according to Colorado State University hurricane researcher Phil Klotzbach.

7:05 a.m. — ppl in Orange emerging from homes and businesses to check out #Laura’s wrath. This guy and his family rode out the storm in their restaurant. Watched power poles snap in front of them. #abc13 pic.twitter.com/V4ln5UDnjy