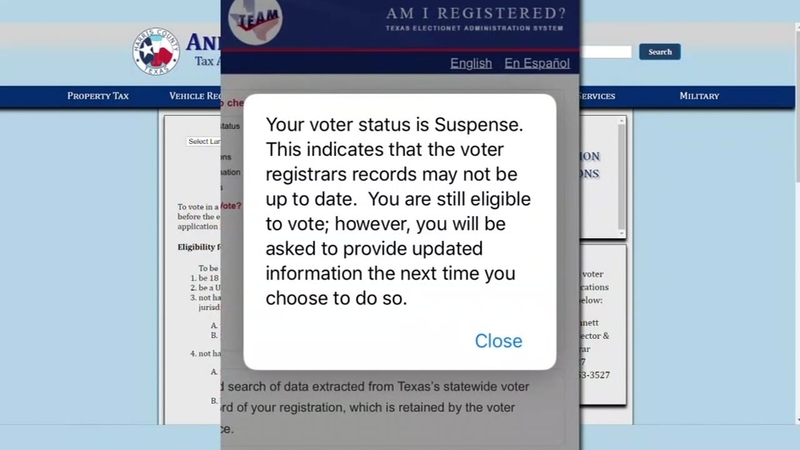 HOUSTON, Texas (KTRK) -- Displaced Hurricane Harvey victims still struggling to recover are now having to worry about one more thing: whether they can vote in next month's primary.

The problem of suspended voter registrations began bubbling up this week.

Nikki Thomason, one of hundreds of people displaced when her Thornwood neighborhood filled with water, never thought her right to vote could be swept away too.

"Angry, angry, you know it's kind of funny the people who are angriest with the government right now, are the people whose votes have been suspended," she said.

Thomason and other displaced flood victims checking their voter registration online were shocked to see messages their registrations were in suspense. Many were not sure if they would be able to vote in the highly anticipated March primaries.

"What went through my mind is, why am I am suspended and why has nobody told me, surely thousands of people are in the same position," said Kimberly Truitt-Turner, another flood victim from the west side.

Turns out, state law requires each county's tax assessor-collector to send a voter registration cards to each voter every two years. If the post office can't deliver the card for whatever reason and they are returned, the registration is automatically suspended.

"I said I don't have a mailbox," Thomason recounted a conversation with an elections clerk. "They're all hit by boats and knocked out during Harvey."

The Harris County Tax Assessor-Collector's office says suspended voters can still vote, they just have to fill out a form at their polling location.

"You are still eligible to vote in the March primary, you just have to fill out the statement of residency form when you go and vote," said Mike Lykes with the Assessor-Collector's office.

Per state law, suspended voters can not update their addresses online. They either have to mail in a change of address or fill out a form when they go vote. Therefore, elections experts are urging worried flood victims to vote early so any confusion can be sorted out. But for those struggling to recover, this is one more hurdle they didn't expect.

"It's one big mess after another it just doesn't end."

You can check your voter registration status below, also remember if you want to register to vote, Monday is the deadline.