Pets sent to west coast after overcrowding from Harvey 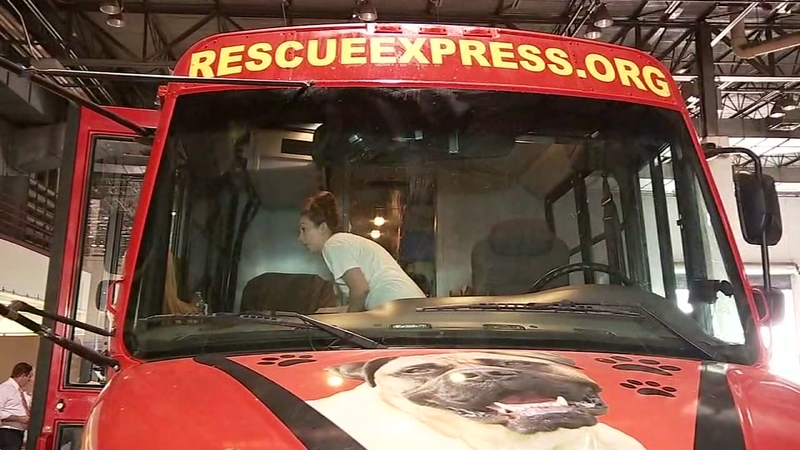 HOUSTON, Texas (KTRK) -- More than 100 pets abandoned during Hurricane Harvey are heading to California. They were transported from NRG Center Wednesday.

Before hurricane Harvey hit Houston there were already hundreds of dogs and cats that needed to be adopted. Now that the storm has passed, there are even more and today some of the animals that are ready for a new home are on their way to California and hopefully a better life.

Life is about get a whole lot better for Briscoe.

The six-year-old lab mix was picked up off the streets in the Sunnyside neighborhood several years ago and has spent his life at a shelter.

Briscoe is not a Hurricane Harvey dog, but in order to make room for pets displaced by the storm Briscoe is headed to California.

"These are not hurricane Harvey rescue dogs, they were owner surrendered or in the pipe line before Harvey hit," said Tena Lundquist Faust with the Houston Pet Set.

Rescue Express is in charge of getting the animals to the west coast.

"Everybody wants to pitch in, there are obviously so many animals that are homeless now so we can absorb some excess capacity that is here in San Diego," said Mike McCarthy with RescueExpress.org.

As for the pets recovered during Harvey, they are being held for 30 days in an effort to reunite them with their owners.

Best Friends Animal Society will list the dogs and cats on its website in the hope of reuniting lost pets with their rightful owners.

"We are going to be here until about mid-October but we are really hoping people are going to come out soon and find their lost pets," said Holly Sizemore with the Best Friends Animal Society.

There are at least 500 animals at NRG that were rescued during Hurricane Harvey with hundreds of others scattered at shelters across the city.

A mass adoption day for the animals who cannot be reunited with their owners will be held in October.