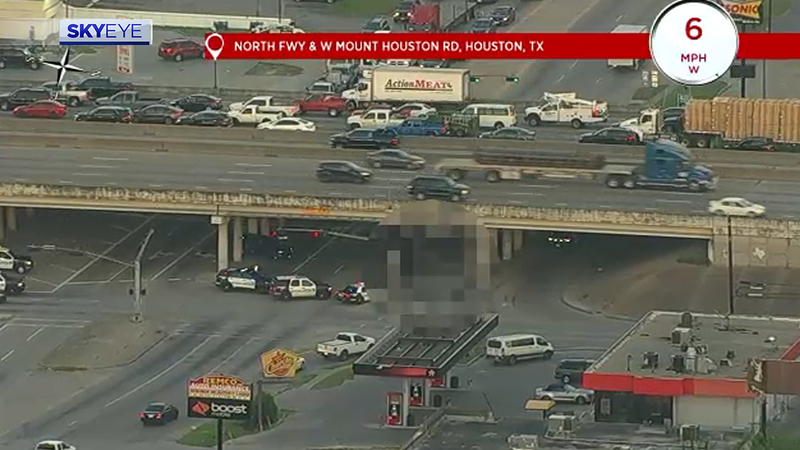 Fatal crash on I-45 underpass causing backups at Mount Houston

The crash was reported around 5:10 a.m. in the 700 block of West Mount Houston Road, at the I-45 North Freeway underpass.

According to Houston police, the 40-year-old victim was riding his bicycle westbound in the eastbound lanes of West Mount Houston when a driver struck him.

Police did not know the suspect vehicle's make or model, but did say it was traveling eastbound on West Mount Houston.

The driver did not stop and render aid, according to HPD.

SkyEye flew over the scene, where the bicycle was seen lying in the roadway.

The victim was pronounced dead at the scene.

The feeder road was closed for hours as crews investigated, causing delays for the morning commute. All lanes reopened around 8:40 a.m.

Anyone with information on the vehicle and driver wanted in this case is urged to contact the HPD Hit and Run Unit at 713-247-4072 or speak anonymously to Crime Stoppers at 713-222-TIPS.
Report a correction or typo
Related topics:
traffichoustonpedestrian struckpedestrian killedfatal crashbicyclebicycle crashpedestrianstraffic delay
Copyright © 2022 KTRK-TV. All Rights Reserved.
PEDESTRIAN KILLED
Pedestrian killed in hit and run in northwest Houston, HCSO says
Man was in middle of McKay bridge when he was hit and killed, HPD says
Man dies after being struck by 18-wheeler while crossing North Loop
HPD searching for 2 drivers after man killed in hit-and-run on I-10
TOP STORIES
NRA convention in Houston day 2: Protests continue at Discovery Green
Uvalde school police underwent active shooter training 2 months ago
Flight cancellations kick off Memorial Day weekend
Livingston school presents student's diploma who was killed in 2021
'Is it worth my kid?' Parents of TX school shooting victim speak out
iFest changes locations after NRA protests take over Discovery Green
Timeline breaks down Uvalde school massacre
Show More
Police inaction moves to center of Uvalde shooting probe
Texas gunman threatened rapes, shootings on Yubo app, users say
Over 3K CenterPoint customers were powerless in NW Harris Co.
Humidity returning, plus a small chance for rain on Memorial Day
Woman gets 15 months in prison for punching flight attendant
More TOP STORIES News