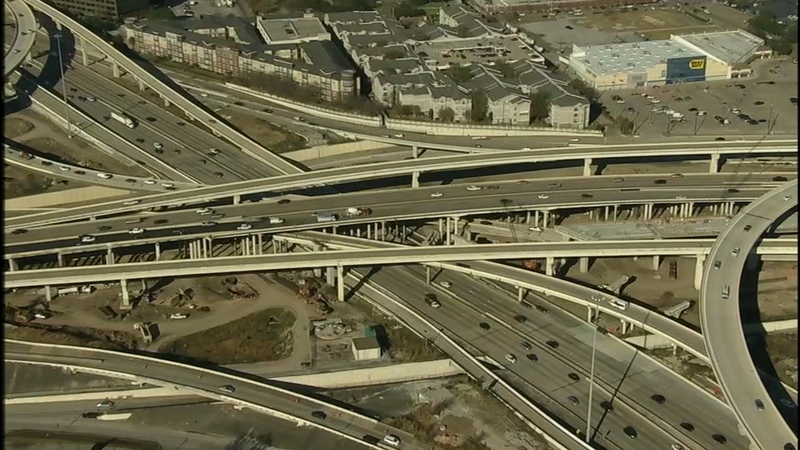 HOUSTON, Texas (KTRK) -- It's well-known as the busiest interchange in the state of Texas and the past year has seen the unveiling of new ramps and exits, but the work is not done yet.

The years-long project to rebuild the interchange at IH-610 and the Southwest Freeway will focus in 2022 on the northbound lanes of the West Loop. Drivers may have already noticed more frequent closures on those lanes during nights and weekends.

The construction will not add lanes to this portion of IH-610 over US-59, so there will still be three mainlanes both northbound and southbound once it's rebuilt. TxDOT says safety and mobility goals include adding shoulders and increasing the sight distance, allowing drivers to better see traffic or wrecks in front of them as they head over the bridge.
"You're able to see that movement," said TxDOT spokesperson Danny Perez. "If there are any vehicles that are stopped, you're able to see that farther back, rather than getting right close to it and you're having to make a last-second decision. "

The massive columns, beams and bridge deck rising next to the current West Loop mainlanes are the start of the new northbound lanes over US-59. You'll likely be driving on those lanes by the end of this year, or early next, with the interchange project slated for completion in 2024.
Report a correction or typo
Related topics:
traffichoustontxdotconstructionfreewaycommutingtrafficdriving
Copyright © 2022 KTRK-TV. All Rights Reserved.
CONSTRUCTION
New 53-mile stretch of Grand Parkway opens in both directions
Drivers to Galveston will soon get some traffic relief along I-45
HCTRA unveils $53M 'tollways to trailways' program
Road work on Gulf Freeway completed early, TxDOT says
TOP STORIES
At least 12 displaced after SW Houston apartment fire, HFD says
'It was like a mad dash:' Clear Creek ISD senior set to graduate
Man dead after being shot during road rage incident, HCSO says
Widespread rain from storm line moving towards the coast
Biden pushes economic, security aims as he ends South Korea visit
CDC recommends wearing masks indoors, ahead of Memorial Day weekend
Fate of 2,500 Ukrainian POWs from steel plant stirs concern
Show More
Murder suspect dead after found unresponsive in cell, sheriff says
Astros fan from Spring celebrates 95th birthday with favorite team
Child hospitalized after found 'unresponsive' at Splashtown
Runner dies after collapsing at finish line of Brooklyn Half Marathon
Global K-pop sensation Seventeen kicks it in Houston in new tour
More TOP STORIES News