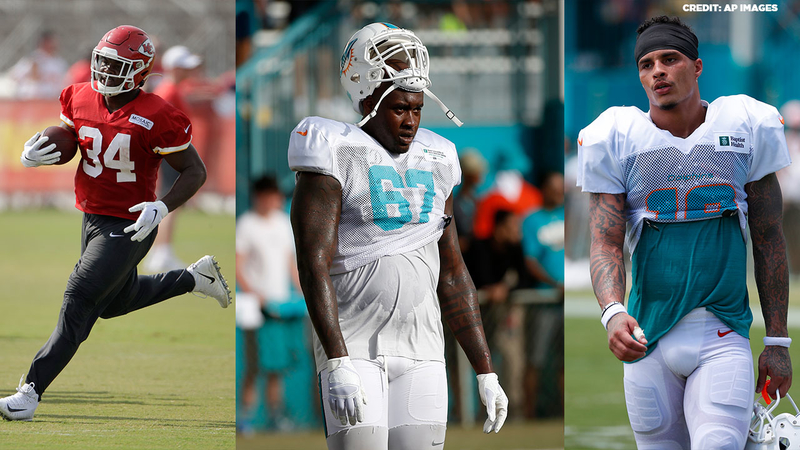 The holdout between Jadeveon Clowney and the Texans concluded over the weekend, and Clowney is now in The Emerald City.

Clowney, the 2014 #1 overall pick, was traded to the Seattle Seahawks on Saturday. Rumors had circulated that Clowney was possibly going to be shipped to the Miami Dolphins, but the Seahawks came instead.

"We think very highly of Jadeveon Clowney," O'Brien said, adding that he feels the Texans made the best move for both Clowney and the organization itself.

Monday was the first time O'Brien publicly spoke since the trade. In return, the Texans received a third-round draft pick and two players.

Clowney finished his Texans career with 205 tackles and 29 sacks.

ABC13's Greg Bailey predicts what's next for the Houston Texans

The holdout between Clowney and the Texans originally started when Clowney was franchise tagged.

It was expected that he would sign a new long-term contract with the organization, but the 3X Pro Bowler could not come to terms on a new contract, leading to his holdout. He had yet to report to anything Texans-related during the preseason.

There have been questions about the Texans' offensive line and ability to protect star QB Deshaun Watson, but some of those questions may have been answered.

OT Laremy Tunsil was acquired from the Miami Dolphins Saturday in a blockbuster trade. Tunsil is one of the premier OT's in the league.

Tunsil was selected 13th overall in 2016 by the Dolphins, and had been with the organization since. Having a player of this dynamic will do wonders when it comes to protecting Watson.

"I feel really good being able to get a proven left tackle,' O'Brien said, adding that the Texans scouted Tunsil out of college, saying many in the organization are familiar with him.

Tunsil is a left tackle who also has experience playing guard. O'Brien said the team does not plan to give him any reps at guard, keeping him at his natural position where he can protect Watson.

This is not the only player the Texans are receiving as part of the deal. Wide receiver Kenny Stills is also coming to Houston.

"We're committed to getting better in all ways," O'Brien said.

Stills made a name for himself during his tenure with the New Orleans Saints, where some had him in the conversation as one of the best wide-outs in the league.

Stills had 37 receptions for 553 yards and six touchdowns last season with the Dolphins.

The Texans offense now has DeAndre Hopkins, Will Fuller and Stills as targets for Watson.

"I think both teams are better for it," O'Brien said in regards to the Dolphins trade.

With Tunsil now in the mix to protect Watson, the Texans offense could put up big numbers this upcoming season.

An under-the-radar trade the Texans maneuvered over the weekend as well was acquiring Carlos Hyde from the Kansas City Chiefs.

O'Brien said he feels Hyde is a solid first and second down runner that can also help in the passing game.

The Texans sent OT Martinas Rankins to the Chiefs in return.

One characteristic of the Texans that stands out compared to other teams is that the Texans are currently operating without a general manager.

While many have criticized the Texans for operating in this manner, O'Brien seems confident in the front office's ability to operate as one big unit.

"The fact that we have a team of people is something that maybe people have to get used to," O'Brien said, emphasizing everyone in the front office's ability to coexist.

"We are very confident in how we operate on a daily basis," O'Brien said.