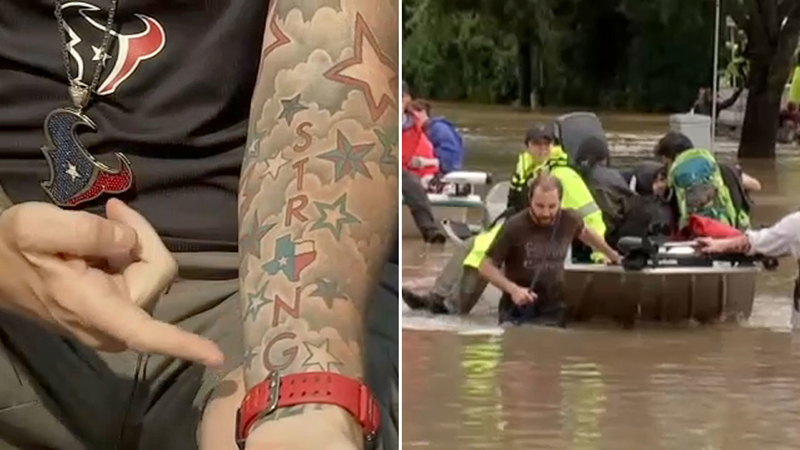 NEW ORLEANS, Louisiana (KTRK) -- Monday night marks a matchup between two NFL cities that are close together for more than their relative proximity - the Houston Texans and the New Orleans Saints.

I promise I was working this weekend ... thank you to all the @houstontexans fans who showed @abc13houston so much love! Let’s get ready for kickoff!! 💙❤️ https://t.co/xwiQQ85GkL pic.twitter.com/iy0HWmhbgl

For a traveling group of Texans fans, the game harkens back memories of two years ago when Houston visited the Superdome for a preseason game. But that matchup took place in the midst of disaster back home.

"There's like three or four of us. We all caravanned down here and everyone was checking The Weather Channel on their phones," recalled Suzanna Stevens, a Texans fan who made it to New Orleans ahead of Houston's season-opener. "Are we going to be able to get back home?"

On the day of the game on Aug. 25, 2017, Hurricane Harvey slammed the Texas Gulf Coast.

"(My son) is like, 'You need to wake up. Things are getting really bad out here,'" said Marby Gibbs, a member of the Traveling Texans group. "My son called and said things are floating in the house. He lives in Santa Fe."

The Texans lost the preseason matchup. The group got ready to head back home, unsure what they would find.

But they were sent off by arguably the best city to have on your side at that time - a city that understands the devastation a hurricane can leave behind.

"Everybody at the stadium said, 'Oh, are you from Houston? We are praying for you. We hope everything goes well.' They were really, really great," Stevens said.

The journey home was not an easy one. Gibbs and Craig Faciane only made it to Baytown, stranded and unable to go any farther. Thankfully, they found shelter.

Stevens and Joey Crispin dropped friends off in Pasadena

"They got out of the car and they walked literally a block, and you could just see them sink chest deep," Crispin said.

Stevens and Crispin were unable to make it to their own home in Magnolia until days later.

For both cities that have endured so much at the hands of Mother Nature, football has always been a welcome distraction.

"That's what I think makes the camaraderie a lot better because we have that bond to where, hey they helped us when we needed it and we helped them when they needed it," Crispin alluded to Houston's response to Hurricane Katrina in 2005. "And we all bond together over that."

ABC13 community journalist Chaz Miller reports from Bourbon Street in New Orleans hours ahead of the Texans' big Week 1 matchup with the Saints.

In their Texas boots, rocking the red and blue, Texans fans invaded Who Dat nation Sunday with an appetite.