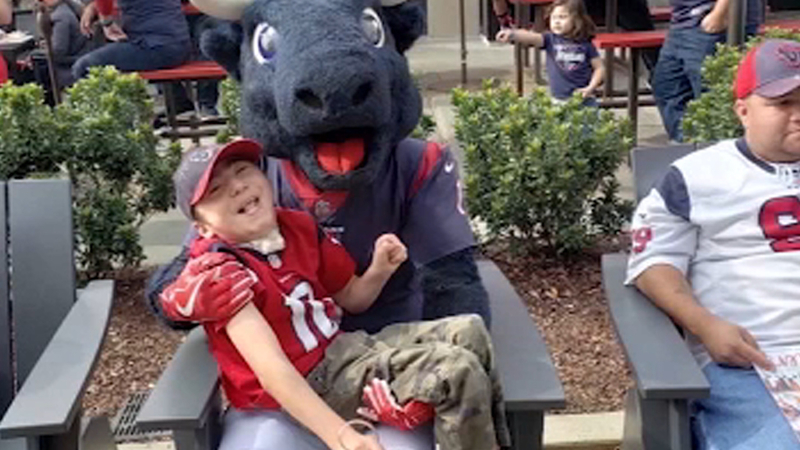 HOUSTON, Texas (KTRK) -- Texans football is more than a game for some fans, and 2020 is making it hard for those that depend on the team for an emotional boost.

For the past several years, fall is all Dominic Tizioukdal and his family wait for.

RELATED: Meet the person behind the Texans mascot

The games are an escape for Dominic as he fights for his life.

"When he was 10 months old, he had a 108 fever from septic shock, which caused massive brain damage," Marie said.

For years, his mom tried everything to get him motivated. Nothing worked, until a nurse introduced him to football.

"One day she asked if she could watch the Texans game," Marie recalled. "I'm like, 'Yeah, he doesn't watch TV.' About five minutes later, we noticed he was watching."

That day, a true Texans sports fan was born.

"He will interact and flirt with any other team no matter what, but the Cowboys. He just gives them a dirty look," Marie said.

Marie added that the Texans have changed Dominic's life.

"It's devastating," Marie said. "Our life during football season revolves around the Texans."

SEE MORE: Two mascots headed to the playoffs have history beyond the field

This year, Dominic hasn't seen his favorite players, coaches or Toro the mascot, who he formed a friendship with as a young boy.

"I love seeing his face when he gets to see his BFF," Tizioukdal said.

This year may not allow Dominic to go to a Texans game, or see Toro, but for a few minutes, Dominic was able to smile again.