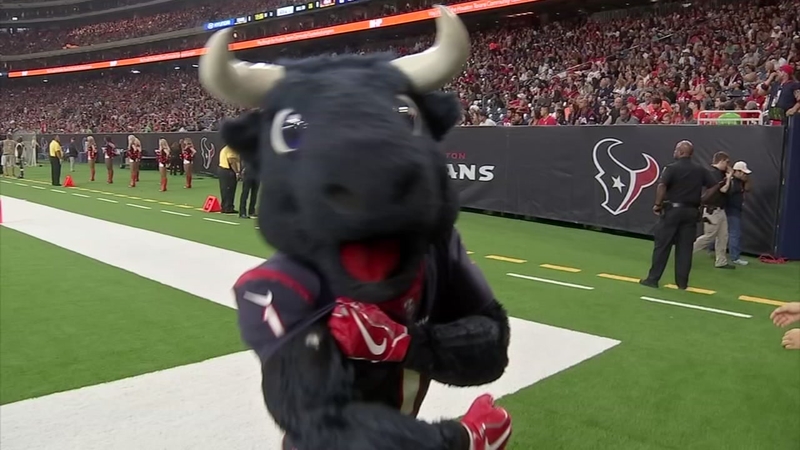 HOUSTON, Texas (KTRK) -- It might be sweaty and hot, but the man behind the Texans mascot said it's a job of a lifetime.

If you're a Texans fan, you've probably seen, hugged and even took a photo with this superfan. But if you passed him on the street, you'd never recognize him.

Three years ago, this performer arrived in Houston. He says walking around NRG Stadium for the first time gave him goosebumps, a feeling he still gets today.

Entering his fourth season, he said people still don't know who he is.

"Every game day, I walk into the stadium and nobody knows who I am," the performer said. "But, by the time I finally put that costume on, everybody wants a picture. Everybody is excited whenever you enter a room."

The mysterious man is the Texans mascot performer, Toro

"My goal is to make everyone in NRG Stadium, or anyone we interact with throughout the community, think Toro is a living, breathing bull that has personality," the performer said.

But the man who gives him personality, usually doesn't get any recognition.

"You can't talk, and you're not supposed to show your face," the performer said.

Well, until now. For the first time in Houston, the Texans revealed the man behind the mask.

His name is Andrew Johnson. Getting to the Texans wasn't easy. Johnson's journey started in fifth grade when the Kansas City Chiefs mascot visited his school.

"I have no idea what educational message he presented that day," Johnson said. "All that stuck with me was he had the coolest job in the world and that was something that I wanted to do at some point in my life."

After wearing the costume, Johnson made the decision to pursue mascoting.

"You can probably imagine the facial expressions my parents gave me when I ran home from school that day and flung open the door and told them what I was going to do for the rest of my life," Johnson said.

Since fifth grade, Johnson performed as a mascot at his high school and college, before ascending to the pros.

The decision to come to H-Town happened when he heard from the original Toro.

"He called me and said, 'Hey, man. You've got to move to Houston,'" Johnson said.

It's a decision he doesn't regret, despite Houston's humidity. But he's not the only character in this story.

For three years, he performed as Syracuse University's mascot, Otto the Orange.

"In high school, I got started young," Natario said. "I was a Looney Tunes character at Six Flags, and I went to college and my (residential assistant) said, 'Hey, there are mascot auditions.'"

During the three years, he competed for mascot collegiate nationals and finished sixth in the country during my senior year.

He went on to work two seasons as a Triple-A baseball mascot for the Syracuse Chiefs.

After college, he worked with the original Phillie Phanatic, touring the country and performing.

After an injury and failed audition with the Tampa Bay Rays for the mascot job, he decided to go into broadcast journalist.

"I still hold onto the memories of that time, but I love what I do now," Natario said.

Performing is a brotherhood.

"Man, [Natario] you were awesome," Johnson said. "I saw you were doing some somersaults. You're in the crowd getting them engaged. Had great animation."

Johnson strives to be better than awesome. He's not just busy with games.

Johnson performs upwards of 400 events a year. A lot of those are at schools. Remember, he caught the mascot bug during a school show.

The hoof is now on the other foot, as he is inspiring kids across Houston with shows that address bullying, math and the STAAR test. And, who knows, just maybe a kid he interacts with will be the person behind the mask when he retires.

"You sweat a lot, and it puts a little wear and tear on your body, but I'll be here as long as I possibly can because I'm living the dream every single day," Johnson said.