Dunk denied! What will NBA do after blown call on Harden shot? 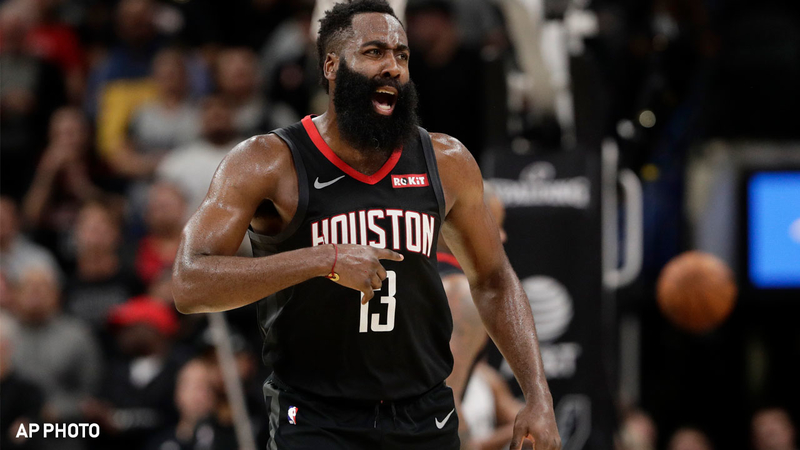 What's the deal with that bizarre James Harden dunk?

The Rockets are hopeful the league office will either award the victory to Houston due to the Rockets outscoring the Spurs in regulation or order that the final 7 minutes, 50 seconds be replayed at a later date, sources said.

Harden's breakaway dunk with 7:50 remaining would have given the Rockets a 104-89 lead. The ball whipped through the net and back over the rim before bouncing off, and the officiating crew mistakenly ruled that Harden missed the dunk and denied Houston coach Mike D'Antoni's attempt to challenge the call.

"When the play happened, Harden goes in for a dunk, and then the ball appears to us to pop back through the net," crew chief James Capers told a pool reporter. "When that happens, that is basket interference. To have a successful field goal, it must clear the net. We have since come in here and looked at the play. He dunked it so hard that the net carried it back over the rim a second time, so in fact it did clear the net and should have been a successful field goal.

SEE ALSO: Grizzlies player ejected after he was hit in the groin

"As to could the play have been reviewed, it is a reviewable matter, but you have a window of 30 seconds to challenge the play during that timeout that he had and while they were protesting the call, trying to get clarification of it, that window passed. So therefore, it elapsed, and they were not able to do it."

D'Antoni, who spoke to the media before the pool report was released, had a different account of the referees' explanation immediately after the play.

"I have no idea," D'Antoni said. "I heard that they said the ball hit James and went back through, so it was a goaltend on James. I challenged that, and I didn't get a response. Then another guy said it wasn't a goaltend; it went out of bounds on us. And I said, 'Well, I challenge that.' Can't do that. You know, I don't know, to answer your question. I've got nothing. I can't tell you."

According to ESPN Stats & Information research, the most recent example of teams replaying part of a game happened on March 8, 2008, between the Miami Heat and Atlanta Hawks. Four months earlier, the Hawks defeated the Heat 117-111 at home in overtime, but the official scorer incorrectly ruled that Miami's Shaquille O'Neal fouled out with 51.9 seconds left in the game. The league decided to have Miami and Atlanta replay the final 51.9 seconds before the teams' next scheduled game, and the Hawks ultimately won 114-111.

Tuesday night, the Spurs outscored the Rockets by a 26-13 margin in the remainder of regulation after the Harden dunk controversy. D'Antoni blamed a loss of focus for the collapse of the Rockets, who led by as many as 22 points in the third quarter.

"I think we lost (focus) before (Harden's dunk), but obviously that just added to the circumstances," D'Antoni said. "We just quit playing defense, we quit getting back, we turned it over silly and didn't get back. They got hot, made shots and we just didn't do anything to combat it."

Harden finished with 50 points despite shooting just 11-of-38 from the field, including 4-of-20 from 3-point range. He also set an NBA record for the most free throws attempted in a regular-season game without a miss (24).

He said he felt the Rockets "just stopped playing, and they gained confidence."

Harden had opportunities to win the game in the final seconds of regulation and both overtime periods.

Harden was called for an offensive foul on a drive with 0.4 seconds remaining in regulation. Officials overturned the foul after the Rockets challenged but instead called Houston center Clint Capela for an offensive foul. San Antonio's Bryn Forbes missed a jumper at the buzzer.

Harden got a good look off the dribble on the final play of the first overtime, but his runner off the glass missed.

In the second overtime, after DeMar DeRozan's free throws gave the Spurs a one-point lead, Harden was called for another charge with 0.8 seconds left.