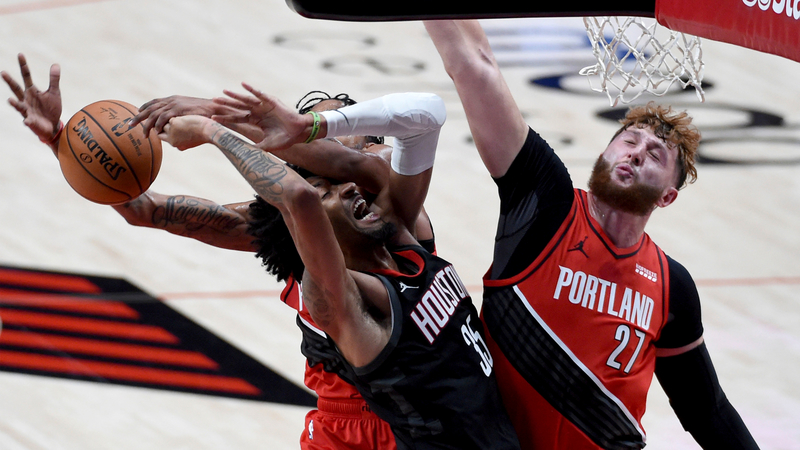 PORTLAND, Oregon -- James Harden finished with 44 points and 17 assists for the Houston Rockets, despite falling 128-126 to the Portland Trail Blazers in overtime Saturday night.

CJ McCollum also scored 44 points, including a 3-pointer with 6.3 seconds left that gave the Trail Blazers the lead.

Damian Lillard had 32 points and nine assists to help Portland get its first win. McCollum also had eight assists.

"I think besides Steph (Curry) and Klay Thompson, we're the only backcourt in the league that empowers the other," McCollum said of his partnership with Lillard. "I don't try to take over the game from him. We work together."

Houston's Christian Wood added 31 points and 13 rebounds. Harden also had a game-ending turnover on the final possession of overtime.

Lillard's layup pushed the Blazers ahead 125-123 with 30 seconds left in overtime, but Harden made a 3 to push the Rockets ahead with 15.3 seconds left.

Then with 6.3 seconds left, the ball found McCollum again and the Blazers' guard hit another long range shot putting Portland ahead 128-126.

"We tried to do everything that it takes as a team to stop whoever has the hot hand," Harden said of the Blazers' guards. "They both started off slow and then the rest of the game the caught fire."

A layup by Wood with less than a minute left in regulation tied the score at 111. Then Lillard put the Blazers ahead at 113-111 with 52 seconds left. Harden responded with a basket of his own to tie it again at 113 with 38.9 seconds left.

After a missed 3-pointer by Lillard, Houston's PJ Tucker was called for a loose ball foul on the rebound with 32 seconds left. Houston's challenge of the call was unsuccessful, but they were rewarded after Jusuf Nurkic missed both free-throws.

Both teams exchanged empty possessions and the game went into overtime.

After Portland jumped out to an early lead, Harden's impact on the game was much more noticeable. Harden had eight assists, to go along with six points, in the first quarter alone.

"I feel like my conditioning could be better obviously," Harden said. "But I think we let it get away from us. I didn't surprise myself at all. I know what I'm capable of."

For Portland, Lillard made good on his promise to be more aggressive after scoring only nine points in the opener, getting 21 in the first half.

But despite the better start and a more aggressive Lillard, things once again went sideways for the Blazers in the second quarter. The Rockets pushed their lead to 40-30 with 8:16 left, all with Harden watching from the bench, forcing a Blazers timeout. Houston pushed its lead to 16 in the first half.

Harden, who had a double-double of 17 points and 10 assists by halftime, also looked like he already had great chemistry with free agent acquisition Wood, who had 15 points in the first half, as Houston led 68-58 at the break.

Houston's grip on the game loosened in the third quarter as Portland's defense started to string some stops together and McCollum got hot. McCollum had four 3s in the third, with three coming in a span of less than 90 seconds on his way to 14 points in the quarter. With the improved defense and McCollum's play, the Rockets' lead was cut to 85-84.

Houston scored only 17 points in the third quarter.

"We were more aggressive, we rotated a lot better," McCollum said of Portland's improved defense. "We're learning, we're learning on the fly. We have to adjust on the fly and take advantage of our time. Hopefully we will have more quarters like the third quarter tonight."

Houston has 16 players on its roster and entered Saturday with nine eligible, one more than the league minimum. The Rockets' scheduled opener Wednesday was postponed because nine players were unavailable, including Harden after he was found to have violated league health and safety protocols. His four-day quarantine ended Friday.

"It's been difficult,' first-year coach Stephen Silas said." We didn't have a shoot around on the gameday on Wednesday. "Then we didn't play, then we didn't have a practice that day and then we had a shootaround today. My preparation as far as film study has been fine but getting us on the same page has been a bit of a challenge."

The Rockets were still without John Wall, DeMarcus Cousins, Eric Gordon and Mason Jones on Saturday, all listed as out by the Rockets with "health and safety protocols" as the reason. Those four players, if they return negative tests, will see seven-day quarantines end Wednesday and could play as early as Houston's home game Thursday against Sacramento.

Ben McLemore and Kenyon Martin Jr. are away from the team and self-isolating, the Rockets said, and Chris Clemons is lost for the season with an Achilles injury.

"We have a chance," Harden said of the Rockets, with the hope they will have a more complete unit next week. "We just have to get things clicking faster than later. We all know the West is a very strong conference, there's no nights off. We have to be prepared each and every game."

With only nine active players and Harden being a late arrival to training camp, Silas was asked about what kind of workload the former MVP would have. "James will play in the 30s for sure," Silas anticipated. "I'll be talking to him constantly through the game. We have to look at this long-term we can't forsake the future and having him go out play 41, 42, 43 minutes but we are going to try and win the game."

As for the four players currently in quarantine, Silas said he expects to have them back for the team's practice scheduled for Wednesday.

The Rockets continue on their road trip to visit the Denver Nuggets on Monday.