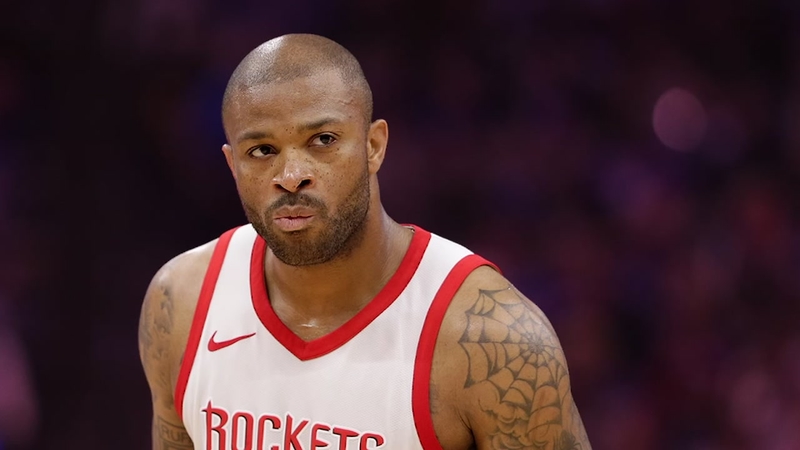 What you may not know about PJ Tucker

HOUSTON, Texas (KTRK) -- There are no doubts that the Houston Rockets are profiting from the tenacity displayed by starting forward P.J. Tucker.

Since arriving in the 2017 offseason as a free agent, the North Carolina-born Tucker has played in every regular season game for the Rockets, averaging just under seven points and nearly six rebounds a game while in Houston.

While that may not necessarily scream out James Harden numbers, Tucker has proven to be a man of intangibles, especially on the defensive end. He's averaging a steal a game while as a Rocket. On top of that, he's made his home as a great fit in head coach Mike D'Antoni's offensive philosophy, scoring threes from "P.J's Corner."

It's definitely value added for the four-year, $32 million deal he signed to land in H-Town.

This wasn't without the weaving path that he's taken throughout his pro basketball career. Much like a vast majority of NBA players, including his teammate Gerald Green, for example, Tucker had to cut his teeth overseas despite entering the league through the draft.

Tucker, who was born on May 5, 1985, was a standout high school player in his hometown of Raleigh, North Carolina, earning the state's player of the year honor in 2002.

He was recruited to the University of Texas Longhorns, with whom he played three seasons. In 2006, he earned Big 12 Player of the Year and conference first team honors in the same season that the Longhorns reached the Elite Eight in the NCAA Tournament. He left Austin after that season, ninth in total career rebounds, eighth in career rebounds per game, and sixth in single-season rebounds among UT players all-time.

Tucker entered that year's NBA Draft, selected in the second round by the Toronto Raptors. After signing a two-year contract, Tucker spent his first season being bounced between the Raptors and its D-League affiliate. He was eventually waived during his second season.

With little interest in his services afterward, Tucker headed for international play, spending 2007 to 2011 with seven different teams in Israel, Ukraine, Italy, Greece, and Germany.

Despite the varied career outside of the U.S., Tucker became a star, winning MVP honors in the Israeli league and in the Italian league finals, the latter of which got him attention back home. In the 2012 offseason, Tucker won a spot with the Phoenix Suns Summer League team and eventually a contract to play in Arizona. He spent five seasons with the Suns, re-signing with them once.

In a full-circle moment of his career, he was traded back to Toronto in 2017 on the final year of his contract. After the short stay, though, Tucker made his move to Houston. While the draw of a bigger role with the Rockets became too hard to pass up, the signing lined up with the Chris Paul trade to Houston. Paul, also a North Carolina native, and Tucker are friends since childhood.

Chris Paul and PJ Tucker talk about their childhood friendship.

In the 2018-2019 season, Tucker started every game of the regular season, a first for his eight seasons in the NBA.

Outside of the court, Tucker, whose P.J. name stands for "Pops Junior," a childhood nickname, is a respected sneakerhead in the NBA, almost to the point that his collection of rare footwear is what will probably make him the most known after he leaves the league.