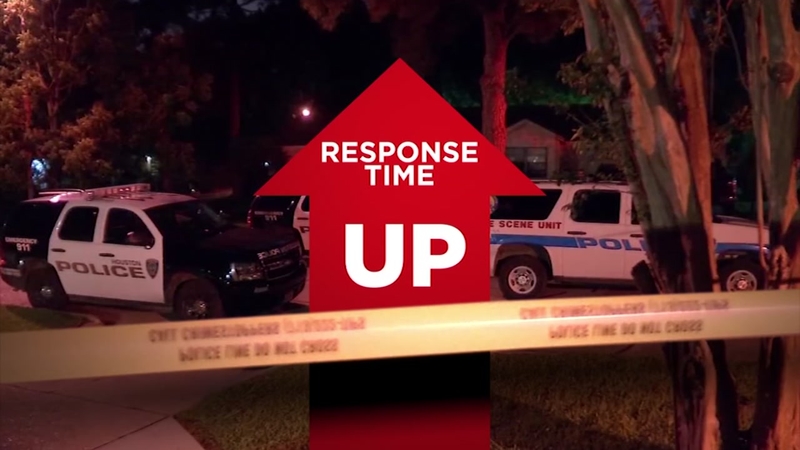 The reason why Houston police response time is up

HOUSTON, Texas (KTRK) -- It takes longer for a police officer to respond to virtually every type of call than it did five years ago, according to data from the Houston Police Department.

Out on the streets, we spent an evening with Officer Cody Gutierrez. Midway through his nightside shift on the city's southwest side, he counted the number of calls waiting on his screen.

"We need to do better in terms of our response times, but at the end of the day no matter we can only squeeze so much efficiency out of the organization. As some point it comes down to resources and funding," said Houston police chief Art Acevedo.

"2018 is a year where we have to have a conversation with this community," Acevedo said. "Our community has no idea as to just how small this department really is."

The good news: crime is down. Homicide impressively so last year. But a deeper dive into the statistics show an alarming rise in response time for the calls that are considered "life-threatening."

Year over year, the response time for those calls is up a minute.

"Our goal is about five minutes," Acevedo said.

Houston police haven't hit that since 2014, according to city documents.

"It's taking us way too long to get there and I feel the frustration," Acevedo said.

When it comes to lower priority calls, discovering your house was broken into while you were at work, for example, response times are approaching an hour.

An HPD report shows in the first half of 2017, there were thousands of calls that needed an officer that waited more than two hours.

Everyone agrees more officers would help, but this year the city of Houston cut millions of dollars from the police budget with barely a mention. We found it buried in the police budget. Overtime was slashed. For years, the department has relied on it and this year, there's virtually none.

"We really don't have any operational overtime," Acevedo said.

When compared to America's 10 largest cities, Houston's overtime budget is by far the smallest. HPD's already blown that budget by millions halfway through the year, even without Harvey.

"You will stay within your means," Mayor Sylvester Turner warned Acevedo at a January city council meeting.

Turner defended it later when asked why he allowed it to go through.

"I allowed it because you can only operate within the budget you have," Turner said.

When asked if he expects more officers anytime soon, Acevedo said the answer was up to the public.

"Ultimately, it's going to be up to be up to the taxpayers," he said. "This is not sustainable."

"No, we're going to stay within budget," Turner told Acevedo. "We've got to operate within our means. And that applies to HPD."